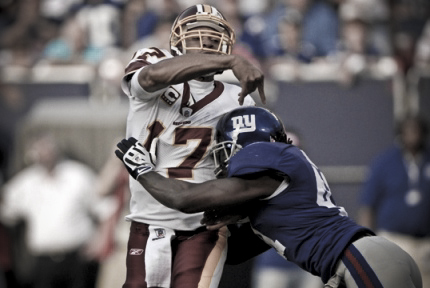 On the first offensive play of 2009, running back Clinton Portis broke free for a 34-yard run to get the New York Giants attention. And before the Washington Redskins could even take advantage of the momentum, they manage to shoot themselves in the foot on the very next play.

We love the idea of striking while you’ve got the defense on its heels, but wide out Antwaan Randle El needed to throw the ball away when he didn’t see anyone open downfield. He said as much in the post-game locker room. He didn’t, and the result was an 11-yard loss. Three plays later the ‘Skins punted.

We’re not killing Randle El – he was one of the bright spots Sunday (seven catches for 98 yards). We’re simply using these two plays to illustrate how the day went for the Redskins as the lost their season opener 23-17. One step forward. Two steps back.

2. “Wake Up” by Rage Against the Machine

Cornerback DeAngelo Hall, who admittedly struggled against Eli Manning and the Giants passing game, intercepted a pass in the third quarter and returned it to the 11-yard line. Again, this was an ideal time to swing momentum in favor of the burgundy and gold. Had they been able to take advantage of the situation and punch it in from close range, it would have been a completely different ballgame (17-14 instead of 17-10 with a quarter to go).

Unfortunately, the offense’s very first play was a six-yard loss on a Portis running play that never had a chance, and Washington had to settle for a fieldgoal. Another opportunity wasted for a team that looks like it isn’t going to have a very large margin for error this season.

Blame Jason Campbell. Blame the offensive line. Blame Obama’s health-care plan. Whatever the case, the offense sputtered at times and was way too careless with the football to win a game against a team as good as New York.

Campbell completed 19 of 26 passes for 211 yards, which was good for a 73 percent completion rate and a 93.6 QB rating. He threw a perfect touchdown strike to tight end Chris Cooley in the fourth quarter to pull within a score. But that’s not the complete story.

Campbell also looked extremely uncomfortable at times and took plenty of shots from an aggressive defense that smelled blood in the water. That pressure resulted in an interception and a Campbell fumble that was returned 37 yards by Giants defense end Osi Umenyiora for a touchdown in back-breaking fashion before the half.

The apologists will blame the appropriate scapegoats. The haters will call for heads on a platter. And at the end of the day, the results remain unchanged – Campbell and the Redskins offense just needs to be more consistent. They show flashes of Jim Zorn’s vision, but these moments are too few and far between. If Campbell and Zorn are going to be around long term, this needs to change. Until then, expect similar results.

Be honest – who had punter Hunter Smith scoring the first touchdown of the 2009 season? Don’t feel bad. Even he didn’t expect to be the first Redskin to find the endzone.

Fun fact: Smith actually scored a touchdown one other time in his career, back in 2003 with the Indianapolis Colts he scored on a 21-yard fake fieldgoal run. So this eight yarder was nothing.

Where were we? Oh yeah … Smith’s eight-yard score on a fake fieldgoal was exactly what the doctor ordered right before halftime. Suddenly, the ‘Skins were down 17-7 and got the ball to start to second half. And at the moment, Redskins fans finally knew what it meant to have an actual NFL-caliber punter.

5. “Gimme Some More” By Busta Rhymes

Sure, NFC East games take on a greater meaning because so much is on the line. But this one just felt like they took it to another level.

Santana Moss found himself helmetless, at the bottom of the pile, in a shoving match. LaRon Landry and Brandon Jacobs got heated more than once. DeAngelo Hall had to be restrained on at least two occasions. These two teams had no interest in helping each other up after plays. They simply wanted to impose their will on an opponent they genuinely don’t like.

If this is what the 2009 season is going to be like, Matt Bowen was right when he told us the training room is going to be full Monday morning. As we know by now, the Redskins fell short and now find themselves in last place in the division. But there’s still plenty of games left to be played, and more importantly, they know exactly what it’s going to take to be a player in the best division in football. There will be no moral victories this week. But that doesn’t mean the team can’t learn from this.

London Fletcher is good. Like, really good. The captain of the defense/middle linebacker was simply everywhere Sunday – finishing with a game-high 18 tackles and laying some big-time hits whenever anyone in a blue jersey dared to cross the middle of the field. There’s a lot of areas in need of adjustments between now and kickoff next weekend, but Fletcher isn’t one of them.