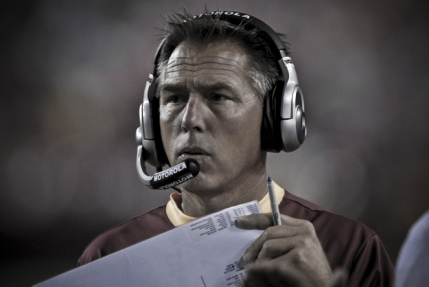 Yesterday, we brought you part one of our interview with Matt Bowen, the former safety who now writes for the National Football Post. In it, Bowen broke down the strength of the Washington Redskins – the defense – and had nothing but positive things to say about guys like Brian Orakpo, Albert Haynesworth and LaRon Landry.

Today, we turn our attention to quarterback Jason Campbell and the rest of the offense, as well as how Bowen ultimately sees the 2009 season playing out in D.C.

Let’s cut right to the chase. Jason Campbell – is he going to get it done this year or not?

“He has to,” Bowen said. “He can’t fail. That’s his entire season. He has to get it done. The last I saw him was the preseason game against the New England Patriots. And I thought the way he led those last two drives in that game were great. You know, I played with Campbell a long, long time ago. He was a rookie on the scout team, and even then, he threw a beautiful football.

“Now, I love his leadership,” he continued. “I love that he led two scoring drives, and I love the fact that he got blasted a few times in that game and came right back, kept playing and scored a touchdown. That tells you something about him. It’s tough to be him. I mean, the ‘Skins tried to trade him at least twice. They tried to get rid of him and basically said, ‘You’re very replaceable. We can get someone better than you to do your job.’ It didn’t happen. But he didn’t pout. He didn’t run to the media. He just kept playing football. And for his sake, I hope he has a great year. Because if the Redskins don’t want him, he can go somewhere else and make some money. But there’s a lot riding on this season. His head coach’s job is on the line too. He has to perform.”

We know what Santana Moss brings to the table. Same with Chris Cooley and Clinton Portis. With the emergence of Malcolm Kelly enabling the team to slide Antwaan Randle El back into his natural position as a slot receiver do you think the team now has enough weapons to actually put some points on the board?

“Yeah, I think so,” Bowen said. “Those two young kids – Malcolm Kelly and Devin Thomas – it’s time for them to grow up. Let’s be honest. They’re in their second year in the NFL. They’re not rookies anymore, so they can’t use that excuse. It’s time for them to make some plays. That’s why they’re getting paid that money. This is a production-based business, and if you don’t produce, you’re going to end up on the street sooner or later.

“And that’s a good point about Randle El,” he continued. “Antwaan is a phenomenal athlete. He’s a guy who kicked my butt back in college when he was a quarterback, but he’s not a number two receiver in this league. He’s just not. He’s a slot guy. That’s where he belongs. He belongs on the inside because, when you put a guy like him on the inside, it creates very favorable matchups. I think you’re also going to see that this year in Minnesota with Percy Harvin, and I wish they would do that here in Chicago with Devin Hester because it gives you so many options and make those guys so tough to cover.

“Part of Jason Campbell’s success this year is going to be can those receivers make plays for him,” Bowen said. “Sometimes you have to just throw the ball up and your guys have to make plays. Think of Brett Favre. A lot of times he just chucks that ball up and his guys go up and get it. Everyone loves the way Favre plays and it makes him look great, but it’s his receivers that are doing a lot of the work. These receivers need to do some of that for Campbell.”

If there’s one area that’s a concern heading into the season, it’s the offensive line. What’s your take on the Redskins O-line?

“I think Chris Samuels is going to have another big year,” he said. “I’ve known Chris for a long time, but let’s be honest, the rest of that offensive line is pretty weak. It’s below average. But they’re going to have to find a way to open up holes, because as much as everyone wants to talk about Campbell and the passing game, if the Redskins can’t run the ball, they’re done. To win football games in the NFC East, they’re going to have to run the football – especially when the weather gets bad later in the year. And, if you have a lead in the second half, you’ve got to be able to grind the clock out.

“One of the most frustrating things back when I was a defensive player was getting the ball back with four minutes and telling the offense, ‘Okay, we did our job. Now go do yours. Get us two first downs and the game is over,’ and then they go three-and-out” Bowen said. “Then you’re back on the field, dying to get off again and hoping you can win the football game. So running the football is huge, and I don’t know if that line is going to open up enough holes. They’ve got to get it done for Clinton. He’s one of the more explosive backs in the NFL, but he is a smaller back and does wear down when he takes a lot of hits.”

What do you think of head coach Jim Zorn?

“Well, he was a player, so that gives him a little advantage,” he said. “But, unless you’re Joe Gibbs, it’s tough to coach in that town. I played for Gibbs and I played for Steve Spurrier, and it was tough for Coach Spurrier because Mr. Snyder expects productive very quickly. If you don’t win, you’re gone. There’s a lot of talk about all the big names that are going to be around next year. Guys like Bill Cowher, Mike Holmgren, Mike Shanahan and Jon Gruden are big names, and they’ll sell a lot of tickets. Those are names that have won Super Bowls. There’s going to be a lot of pressure on Coach Zorn. I hope he and Jason Campbell can both produce this year because the only way I see him coming back is if they make the playoffs.”

Okay, fair enough. So point blank – will the Redskins make the playoffs?

“I don’t think so,” he said. “If they were playing in another division, then yes. Think about the teams they’re going to have to jump to get there. Dallas? You know how competitive those games are. Philly and the Giants? That division is loaded. Can they do it? Yes. Without a doubt, they can. But will they? I don’t think they will. To do that, you’ve got to win in the division. All those other games are great to win, but if you don’t win in the division, you’ve got no chance.

“We’ll find out a lot about this team this weekend when they play the Giants,” Bowen said. “That’s going to be a physical game and guys are going to get beat up. The training room is going to be full on Monday. So it’d be nice for them to come out of New York with a win.”

Okay, you said they’ve got to make the playoffs for Zorn to keep his job. Since you’re not saying they’re going to do so, who will be the head coach next season?

“Mike Shanahan,” he said. “That’s my call. I could be totally wrong, but that’s how I see things playing out.”

That’s not exactly the happiest of endings to this interview, but anyone who saw our official predictions earlier this week knows we’re on record basically saying the same thing. This team has a ton of talent, but the playoffs are far from a certainty. And if the ‘Skins don’t make the postseason, we’ve got a feeling Shanahan will be the 28th head coach in franchise history.