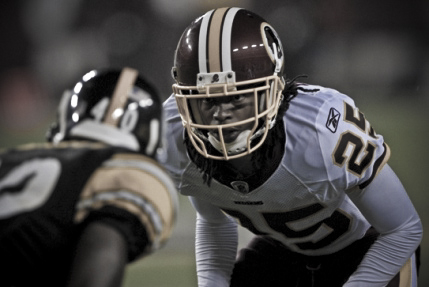 With five minutes left in the third quarter, Washington Redskins rookie cornerback Kevin Barnes showed fans the first hint at the player he hopes to become.

On second-and-10, Pittsburgh Steelers quarterback Dennis Dixon threw a pass down the right sideline that was intended for Brandon Williams. Barnes started behind Williams, but read the play quickly enough to lunge in front of the receiver at the perfect time to break up the pass.

It wasn’t highlight-reel worthy. It wasn’t flashy. But it’s the kind of play the Maryland rookie needs to make if he’s going to earn playing time this season – especially after missing several opportunities against Baltimore one week earlier. So forgive Barnes for his momentary honesty.

While many would have downplayed things and resorted to bland athlete rhetoric, Barnes freely admitted the moment was so enjoyable that he planned on re-living it later that night.

“Yeah, it was a good play and I’m going to dream of it tonight,” Barnes said. “I broke on it so good, I really should have picked it off and scored. I’m definitely going to dream about that play tonight.”

So you’re saying you’ve got good enough hands to pick off passes like that?

Everyone’s seen the hits on YouTube, but we’re not sure people have seen too many interceptions for you …

“I mean, I didn’t really get too many balls in college, but the ones I got a chance on, I did catch,” Barnes said.

You were very critical of yourself one week ago against the Ravens. How do you think you fared against the Steelers?

“I think I did very good,” he said. “Coach [Greg] Blache told me before the game to just go out there and compete. I realize that a lot of times, he’s pretty tough on me. But if he didn’t care, he wouldn’t be so tough on me. Mr. [Vinny] Cerrato talked to me last week also. He told me I’m out there playing too timid. He was like, ‘I’ve seen you play more physical. Go out there and play more cocky.’ So I was out there on the field, bouncing around, talking trash a little bit and made sure I had fun.”

We were just about to bring that up, because it sure looked to us like you were getting down to the in-stadium music during the breaks in action …

“Oh, you’ve got to,” Barnes said. “You know corners love attention, so I’ve got to draw a little attention to myself.”

How important was it for you to rebound and have a big game this week?

“Like I said, I was kind of in a twilight last weekend,” he said. “I didn’t really know what to expect. But I made sure I stepped up. It’s about time for them to start making cuts and everything, and just because I was the second person drafted here, don’t mean I’m necessarily safe. I realize there are jobs out there for me to earn, so I just made sure I focused real hard on doing everything as best I could during practice. I wasn’t trying to necessarily hurt myself, but I was working so hard that I had nothing left at the end of the day.”

Come on now, you didn’t really think you were getting cut …

So now that you’ve started to work things out, what do you have to do to keep heading in the right direction next weekend against New England?

“Go out there and watch film like I did this week,” he said. “And just be myself. Don’t be whoever I was last week. Don’t be that guy.”

Anyone who talks to the kid can’t help but walk away smiling. Maybe it’s because he doesn’t talk in “athlete speak” or maybe he’s too young to know any better. Whatever the case, if Barnes continues to make plays on the field and entertain off it, we have a feeling he’ll be someone local sports fans will have no problem embracing.