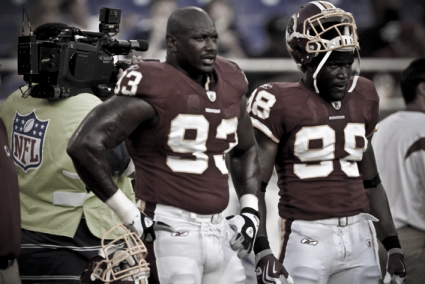 Yes, preseason games are meaningless. That’s something we can all agree on. As soon as the regular season begins, no one remembers how teams fared in the preseason.

But that doesn’t mean we shouldn’t watch.

When the Washington Redskins traveled to Baltimore to take on the Ravens last week, it gave ‘Skins fans their first real glimpse into what one might reasonably expect from this year’s rookie class. Until now, these young players have been nothing more than camp fodder – youngsters so green that they don’t even have logos on their helmets yet.

Good, bad or ugly, this game was our first impression of rookies like linebacker Brian Orakpo, defensive back Kevin Barnes and defensive end Jeremy Jarmon. Will each of these three athletes play an integral role on what should be a top 10 defense? Or will this draft class be like 2008’s, which saw the meteoric rise of safety Chris “The Predator” Horton, and not much else?

Horton is actually the perfect example for why fans should tune in for preseason games. Sure he made a name for himself against the New Orleans Saints last September, with two interceptions in his first-career start, but he’d already shown flashes. People tend to forget that “The Predator” first showed what he was capable of in the preseason, when he picked up two sacks against the Indianapolis Colts during the Hall of Fame game in Canton, Ohio. But that kind of individual effort is more than enough reason to tune in during an otherwise meaningless evening.

So while the ‘Skins took a beating, losing 23-0, we were more interested in watching the rookies play and hearing how they thought they fared.

Okay, Mr. Orakpo. You just finished your first preseason game. How’d you do?

“You know, I’m not sure,” Orakpo said. “I’ve got to watch the tape. It was my first preseason game, and I know I made some mental errors and some mistakes, just like anybody would. But overall, if we can just improve on some things – I thought I did some good things and defensively we did some things good, but we can always improve.”

How did you feel in pass-rushing situations?

You said you thought you’d be nervous heading into your debut. So be honest, were you?

“Yeah, yeah, yeah,” Orakpo said. “Once that first drive was over with, it was back to football. This is the NFL, but at the end of the day, it’s just football. After that first series, I was able to stay calm and just play.”

Not to take anything away from Orakpo, but we wanted to touch base with a veteran or two and see what they thought of his first game as a member of the Washington Redskins.

“He did really good,” said defensive end Andre Carter. “He looked really comfortable out there. Whatever he applied on the practice field, he took it to the game. That’s important because, as a rookie, the last thing you want to be is a ‘practice player.’ You’ve got to be able to apply that to gameday situations.”

It looked to us that the Ravens were double teaming Orakpo pretty regularly. Is that what you saw?

“Yeah, they were,” he said. “And that’s great. They were definitely chipping him up a little bit. I don’t want to give him too much credit though, I’m sure it was part of their gameplan.

(Laughs). “No, no, he did good,” Carter continued. “He looked good on the line and also at linebacker. He did really good out there and looked like he belonged.”

Horton also noticed the amount of attention given to Orakpo’s side of the field whenever he put his hand on the ground and lined up at defensive end.

“That says a lot,” Horton said. “Teams have enough film on him from college to know he’s a special player. You pretty much have to double him because he’s so good, chances are, he’s getting a sack.”

Orakpo was among the starters, and although most of them played one series before calling it a night, the former Texas Longhorn standout found himself on the field for much of the first half. During his extended playing time, Orakpo logged two tackles and pressured Ravens quarterback Troy Smith into throwing an incomplete pass, which was enough to make an impression on head coach Jim Zorn.

“I thought he had exceptional speed,” Zorn said. “I thought he played hard. I liked what I saw. I think we got a player there.”

While Orakpo stood out for the right reasons, Barnes wasn’t so lucky. He got caught looking on a double-pump move by Smith, who connected with Justin Harper for a 19-yard touchdown. We caught up with Barnes in the locker room following the game to get his thoughts on game one.

“I feel like I finished harder than I started,” Barnes said. “It was kind of a blur … well, not really a blur out there, but I made a couple of mistakes. I had to rebound, come back and play harder in the second half.

Are you beating yourself up over the touchdown?

While Barnes was very critical of his performance, Horton was encouraged by what he saw from the rookie.

“This was his first time out there,” he said. “Everybody’s goal is to come out the gate strong, but it doesn’t happen for everyone. Sometimes you’ve got to get a feel for how it is on this level. I think that every week he’s going to get better. He knows he didn’t start well, but he got better. That’s what you want to see from a young guy like him.”

While Orakpo was solid, but unspectacular and Barnes wished he could have a do-over on a couple plays, Jarmon looked right at home seeing live action for the first time in his professional career. He had several quarterback pressures and made a nice play to shed his blocker and batted down a passing attempt.

“I did okay, for a rookie,” Jarmon said. “I went out and felt like I played hard, made some plays. There were some plays that I have to make if I’m going to be able to help our team out this year. You know, I was able to flush the quarterback out a few times. I got my hands on him on three occasions and failed to bring him down. I’m frustrated in that aspect, because I have to capitalize on plays like that.”

“I was getting up the field and the tackle attempted to chop block me,” he said. “He tried to cut my legs out from underneath me and I just used my hands, got him off of me and looked the quarterback right in his eyes. I was able to get both hands on it and it would have been nice to get the interception. That didn’t happen, but it was a good play.”

What can you personally take away from a game like this?

“Our backs were up against the wall,” Jarmon said. “We came into the game and the score was 13-0. It was on us to reserve the field and get our offense better field position. The pressure was on us in the second half to make some plays, and we didn’t make enough plays. We weren’t consistent enough and that’s something in this next week of practice we’re just going to work harder on.”

And what did Carter think of Jarmon’s inaugural performance?

Overall, what can these kids take away from a game like this?

“It’s always a learning experience,” Carter said. “The good thing about preseason games – they don’t count. It’s just preseason. You’ve got to have short-term memory, which I’m sure they know. And second, you’re not going to get cut after the first preseason game.

Orakpo, Barnes and Jarmon each stood out at times during the Ravens game. Sometimes they were good. Sometimes … not so much. But if each of these rookies uses that experience as a starting point and continues to work hard on and off the field, each of these three players could become regular contributors sooner rather than later.

It’s a good thing each of these rookies will have plenty of time to slowly make the transition though, right?

“Now the second preseason game, that’s when you have to step your game up,” Carter said.