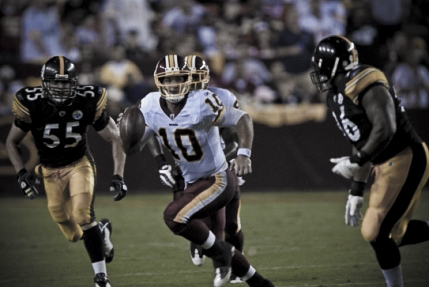 It seems like only yesterday we were referring to this town’s love affairs with backup quarterbacks.

We were specifically addressing fans who’ve taken it upon themselves to call for Todd Collins and/or Colt Brennan to take over for Jason Campbell. But in the interest of fairness, we felt obligated to acknowledge the surprisingly-strong play of fourth-stringer Chase Daniel.

The rookie out of Missouri looked downright at home in his debut at FedEx Field, leading the Washington Redskins (backups) to a victory over the Super Bowl champion Pittsburgh Steelers (backups) 17-13, Saturday.

Daniel (or Daniels if you’re Joe Theismann) completed six of eight passes for 58 yards and the only two touchdown passes of the preseason for the maroon and black. When the Steelers turned on the heat, he responded by scrambling for 22 yards. And, most importantly, Daniel turned in the best performance by an Redskins offensive player in 2009. So let the QB controversy begin.

Daniel’s first touchdown pass was a fade route to fellow rookie Marko Mitchell. This play was noteworthy because it was quite possibly the first successful fade route thrown by a ‘Skins quarterback since Brad Johnson. We have no idea if that statement is actually true or not, but it sounds accurate, so we’ll go with it.

The second touchdown pass was an 18-yarder to tight end “Sleepy” Fred Davis that ultimately proved to be the difference against Pittsburgh.

“I had a feeling it could come to me,” Davis said of his first NFL touchdown reception. “When I saw that the safety bit, I was like, ‘Please throw it. I’m open. I know I’m going to be open.’”

And since Daniel did, in fact, throw it to Davis as requested, he felt obligated to say kind words about the young signal caller.

“He seemed confident,” Davis said of Daniel. “He slang the rock; running it. It’s like he knew what he was doing.”

Head coach Jim Zorn was equally as impressed with the littlest quarterback on his roster.

“Chase had a wonderful night,” he said. “He had six-of-eight. I think he had 58 yards and he was poised. We are working on some tempo things. He was excited, he hung in there, he got a nice scramble for a first down, he threw to Fred Davis for a touchdown and Marko Mitchell for a touchdown. I was excited for a guy not getting a lot of reps to perform with some poise.”

This was one of the first areas Daniel touched on with the media in the locker room after the game.

“Coach has said, ‘Don’t count your reps, make your reps count,’ and that’s what I’ve tried to do in practice, and to just take the practice field over here to the game field,” he said.

Basically, he knows he’s not going to get extensive playing time. But Daniel also knows when the coaches do put him on the field, he needs to take advantage of the situation.

But while many of the FedEx Field faithful might not have expected such a strong showing, there was at least one person in attendance who wasn’t surprised at all.

“Man, I played against him in college,” said wide receiver Malcolm Kelly. “He was in my conference in college, so I know all about him. We played them twice my junior year, the last year I was in school, so I know what he can do, man. He just has to get a shot. He’s an athlete, and he was born and raised in the state of Texas too, so that says a little something about him too.

“You know how we do it down there,” Kelly said.

Not wanting to take the moment away from Daniel, we opted to let Kelly’s comments about the state that shall not be named slide. That being said, if Daniel keeps making the most of every opportunity he gets, there’s little doubt that Daniel will continue to earn a living in the NFL. If not in Washington, then somewhere.

As let’s be honest – D.C. is the perfect landing spot for Daniel. None of us know if he’s actually going to become a legitimate NFL player, but that won’t stop fans from falling for him if he throws another touchdown or two before the preseason ends.