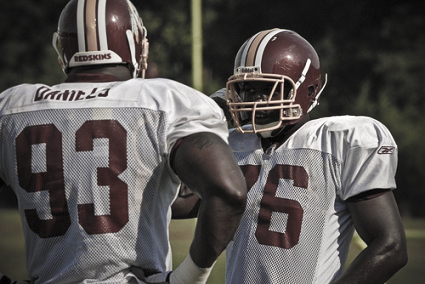 After Daniels told us he was hopeful he’d be able to sign Jarmon as one of his first clients once he becomes an NFL agent, we wanted to get the rookie’s reaction. We recently caught up with the promising youngster to get his take on that and whatever else was on his mind.

Okay, you’ve been a professional football player for a few weeks now. How are you handling the transition?

“It’s coming well,” Jarmon said. “It’s football. I’m out here trying to get better every single day. Some of the guys are a lot faster [than in college], but the overall speed of the game isn’t necessarily faster. The biggest difference is the pace at which you have to comprehend what’s going on. But I played in the SEC, which is the closest conference you can compare to playing in the NFL. I played against a lot of teams with great size and speed.”

So your head isn’t swimming?

“No, every now and then I get out there and something throws me off,” he said. “But for the most part, I’m just staying focused. At night, before I go to bed, I’m taking mental reps to understand the plays so when the play starts to develop, I know exactly what I need to do.”

You’re so new to town, that folks might not know much about you. What’s the scouting report on Jeremy Jarmon?

“I just think I’m a very versatile player,” Jarmon said. “I think I play with very good leverage, which gives me an advantage against guys that are bigger than me, stronger than me or outweigh me by a lot. I have enough weight to hold my own in the running game, and I think I have the speed of a smaller defensive end to turn the corner. I have a lot of expectations of myself as the season opens up and we begin the preseason. I can’t wait to get going.”

We talked to Phillip Daniels, who stressed he and the veterans got with you on day one to offer their support and veteran perspective. Has that been the case?

“Absolutely,” he said. “They’ve been very generous with that information. I don’t even have to go to them and ask for things. They come to me and say, ‘Hey you did good there’ or “Next time do this.’ In the meeting room or after practice, they’re always pointing out ways I can improve. I’m taking all of that in, and that’s what I’m coming back out here and building on every day.”

He also mentioned that he was hoping to sign you as a client once he became an agent. Have you guys talked about that?

“Yeah, Phil told me that once I got here,” Jarmon said. “He said, ‘Unbelievable. I’ve been scouting you over the past few months and now you’re here.’ You know, it made me feel good to hear that from a guy of Phillip’s caliber. He’s a great guy and a true professional. For a guy like that to have scouted me and to have wanted to represent me, that means a lot to me.”

Jarmon began to catch people’s attention by picking up two sacks during the team’s scrimmage last weekend. Having a chance to finally talk with the guy, we walked away impressed that Jarmon has the right mindset heading into his rookie season, and if he continues to push himself, he could contribute to this defense a lot sooner than people realize.