daniels to jarmon: take my job 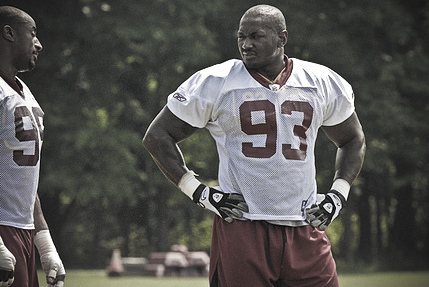 The Washington Redskins surprised fans this past offseason when they ventured into the NFL’s supplemental draft for the first time in franchise history by selecting Kentucky defensive end Jeremy Jarmon with a third-round pick.

While many ‘Skins fans knew nothing about the kid and were left scrambling to figure out information about the team’s newest addition, one member of the team’s defensive line was immediately ecstatic.

After receiving a tip, we caught up with Phillip Daniels last week to find out exactly why he was so happy to have Jarmon join the team. It didn’t take long to see we were on to something.

Hey Phil, we wanted to talk to you about Jeremy Jarmon …

We heard a little rumor that you had an interest in the kid even before he ended up here. What can you tell us about him?

“You heard I was doing some studying on him,” asked Daniels.

During the offseason, we talked about you possibly becoming an agent once your on-the-field career is done. Now we’re hearing Jarmon might have been on your radar for that very reason. What say you?

“Yeah, he was someone on my radar,” he said. “I told him I did a lot of research on him. I studied him, did a lot of background on him and was going to send him out some information and everything. The next thing I hear, he got suspended and then he’s in the supplemental draft. So yeah, I told him about that and I really felt like I could have got him, helped his career out and helped him to have a long career. But I still got him, so it worked out anyway.”

You said you did your homework, so why don’t you give us a little scouting report on Jarmon. What did you see that caught your eye when you watched him?

“Well, first of all, I knew they had him projected to the third round,” Daniels said. “Going into your senior year, I know that you’re hungry. You know you’re going to get drafted. I figured I could get him picked high in the second round. He’s from Kentucky, in the SEC, and I was also looking at some of his teammates. There’s a corner and a linebacker that are also on my radar …”

So you’re just trying to pick them all off, huh?

Okay, back to Jarmon …

“I knew he had seven sacks a couple years ago and he had four last year,” Daniels said. “His skill set – he’s good at rushing the passer. He’s big and physical, kind of like me. He’s a two-way guy. He can play the run – he’s 280 lbs. – and he’s effective as a pass rusher and he’s got good speed. I felt like if we would have gotten him a few workouts before the combine and the pro day, we could have gotten him down to a 4.6 [in the 40-yard dash] and got him ready. Of course, he ended up coming here, so it’s all good. It worked out for me either way because I’m still able to work with him.”

We don’t know if you’ve thought this out, but this kid might ultimately end up taking your job. What say you?

(Laughs). “That’s fine,” he said. “After 14 years man, you know, I need somebody to step up and take that spot. Let me rest a little bit and play behind him. I told him eventually he might be the starter and I might have to back him up, but at the same time, he’s going to have to come out here and learn everything you can from guys like me and Renaldo [Wynn].

Um … did you really offer advice to the guy on how to take your job? What exactly did you say to the kid?

“Don’t feel bad about asking questions,” Daniels said. “Come to us and ask us anything. We’ll help you out – that’s our job. You know, somebody helped us out when we were young, so we want to come out and help him too. If we help him have a long career, then we did our part.”

Walking away we couldn’t help but think that this is yet another reason why covering the ‘Skins is like nothing else in professional sports. The story started with a veteran keeping an eye toward his next career move and ended with the duo unexpectedly becoming teammates. Instead of being disappointed at not being able to sign the rookie as a client, Daniels has gone out of his way to set Jarmon up for success – even if it ultimately comes at his own expense. If that doesn’t say something about the character of the man, then nothing does.