phil daniels is ready for whatever 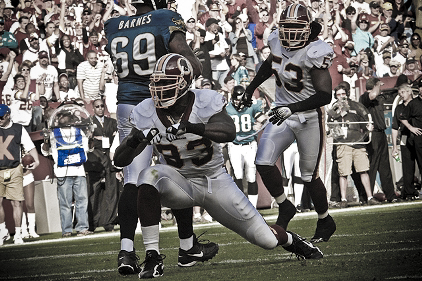 With free agency less than a week away, we caught up with Washington Redskins defensive end Phillip Daniels over the weekend to talk about bouncing back from a season-ending injury, losing teammates to “business decisions” and his plans for life after football.

We saw an article last week that said the final two years on your contract had been voided and you’re about to be a free agent. When the heck did that happen?

(Laughs). “Really, right now I’m trying to figure out what’s going on with that too,” Daniels said. “I know I’m a free agent. I know I only had five years, of course they put those last two years on there to help the salary cap out and I restructured my deal a while back, but I’m a free agent. That’s what my agent tells me. I’m not on any of the publications or websites or whatever saying I’m a free agent, but I am.”

When did you find out that your status had changed?

“I knew that going into last season,” he said. “Even before I got hurt my agent told me that the years they had put on the end of my contract weren’t going to be … well, you never know about the Redskins. They could talk to me about keeping those years or have us look at our options. I’m not sure what’s going on right now, man. We’ll have to see what happens.”

You mentioned the injury. How’s everything coming along rehabbing back from that?

“Yeah, I feel pretty good, man,” Daniels said. “I’m already squatting over 400 lbs. I’m back into powerlifting and doing everything like that. Of course, Dr. [James] Andrews wants me to take it slow with all of the running and stuff, but I’m doing ladder drills and cuts and everything. I’m actually running pretty good on the treadmill and I’ll be back up with the Redskins this week. I guess they want to get a look at me before free agency starts and see where I’m at, but I’m really feeling great. I can’t complain, my knee is doing good. To be able to be back into powerlifting, squatting and doing the things I’m doing – it’s just amazing how quick I’ve healed.”

So where are you at these days?

Since the season ended have you done anything other than rehab? Any vacation time or something fun like that?

“Yeah, I went to the Pro Bowl,” Daniels said. “I went to hang out with Clinton [Portis], Mike Sellers and [Chris] Cooley. I enjoyed that. I went a week ago – I just took a little time off to go out there and support them – but other than that I’ve just been working and training. I’m just trying to get back and get ready. Of course, I’ve got five more months before camp starts, the big camp. I’ll probably end up doing some of these small camps and OTAs this summer, but right now I’m just doing like Dr. Andrews said and I’m taking it slow.

“The good thing about my injury was when I hurt it,” he continued. “It was a blessing with the timing. At the time I didn’t know that, I was just mad. But getting hurt in July gave me a whole year to be ready to go for next season. So I have a whole year, as opposed to a guy who gets hurt during the season and has like eight months to try and get back ready to play.”

It’s not a stretch for us to go ahead and say that you want to be back on the Redskins, right?

“Yeah, I’d love to be back with them,” Daniels said. “We’ll have to see. I know it’s a business and I know that they’ve told me they want me back, so we’ll see. We’ll see what happens. I know they’ve got lots of decisions to make with other guys, but I really don’t think this team is that far from making it to a championship. I’d love to be back.”

Speaking about football being a business, the Redskins released one of your friends, linebacker Marcus Washington. Have you had a chance to talk to him yet?

“Yeah, I’ve talked to Marcus,” he said. “It’s a sad day. Marcus is one of those guys who is a great leader. He used to break down our huddles and he used to quote this movie Drumline. He’d said “one heartbeat” and everyone would say “one sound.” I was thinking to myself, that today our heartbeat is a little bit slower. He’s still going to be a good player next year and I’m pretty sure a lot of teams are going to go after him.

“I really feel like he’s probably going to end up in New Orleans,” Daniels continued. “Gregg Williams loves him, and a lot of teams could use a guy like him that goes out, plays hard and leaves it all on the field. Like I said, they have to make decisions and we just have to go with their decisions. I know it’s a business and he does too. He said it’s probably time for him to move on and, of course, he’s going to be missed by all of us. I hate to see guys who came in back in 2004 leaving. You know how I feel about those guys and how close we are. It’s just sad to see him go.”

We know everyone says it’s just a business decision, but let’s be honest – days like this suck. Seeing high character guys like Marcus Washington being shown the door doesn’t sit right with us. Elite teams always have quality leaders like Washington, right?

“Yeah, I think so,” he said. “I think we lost a great character guy. The thing about the 2004 class, they can say what they want about us, but in the five years we’ve been there, we’ve had a top 10 defense four times. That’s with our offense not even ranking in the top 10 or our record being that high, so you’ve got to think about what we’ve put in there as part of this Redskins family. We had a purpose in life. We were hungry. None of us had championships and all of us wanted one. All of us still want one. Every time I talk to one of the guys from the 2004 class that’s the first thing that comes out they’re mouth, man. They say ‘I’m tired of being mediocre. I want to win a championship.’

“That’s why we were a great group and why we went out and fought hard,” Daniels said. “That’s why we were ranked in the top 10 four of those years. Hopefully I’ll be back and hopefully I can continue toward that. Greg Blache has been good to me. He brought me in from Chicago and I’ve been in his defense for nine years now. I know his defense inside and out. So we’ll see what happens. I would love to be back with the Redskins, but like I said, it’s tough when you lose guys like Marcus Washington.”

Last season the defense lacked a big-time run stopper and that’s something you’re known for. People also forget that with your long wingspan you’re routinely among the league leaders in pass deflections …

“You know, that’s one stat that they don’t keep up with,” he said. “I’ve been one of the top guys in the last four or five years in that stat. Even with the Bears I always had a bunch of deflections, batting down passes at the line of scrimmage. You know, to me, they’re just as important as a sack. I’ve had 10 of those each year, but a lot of people don’t look at that. It don’t even show up on the stat sheet, but I think it’s definitely something people should notice more.”

How hard is your situation right now – not knowing where you’ll end up next season?

“For me, it’s not that hard right now,” he said. “I’ve talked to Greg Blache and I’ve talked to Dan Snyder and both say they want me back. They also say they want me to go inside and play some tackle. Of course I can play all of the [defensive line] positions and that’s a bonus for me. I’m not really concerned about where I’ll play next year. I know I will play somewhere next year. I’m hoping it’s with the Redskins, but if it’s not, then I know someone’s going to have a great player in me and I’ll go out and work hard and play hard every time.”

During the course of our conversation Daniels also mentioned he might consider becoming an agent. Seeing as we’ve always thought he’d be a lock to get into coaching, we had to ask him about it.

“Yeah, for me, I think I might want to get into the agent business,” he said. “So whatever team doesn’t want to give me an opportunity, they’re going to have to deal with me later.”

Seriously, we thought you’d end up as a head coach one day. You’re telling us you might pass that up to be the next Drew Rosenhaus?

(Laughs). “You know what, a lot of people want me to coach,” Daniels said. “I’ve just got to figure out which one of those I want to do. I don’t know. Being an agent, I’d still be around the sport a lot and be around guys who I can help out through tough times and deal with situations like this. But at the same time, you know my passion for football and coaching. People say I’ve got a knack for it and say that they can come to me and I help show them what to do. They say it’s kind of like I’m coaching on the field right now. I think that’s something important to bring right now. When things aren’t going good, I try to be there on the field to help them get through it. But with being an agent, I think it’s something I really want to do. I think I’m already set with that, so we’ll see.”