jarmon excited to be a redskin 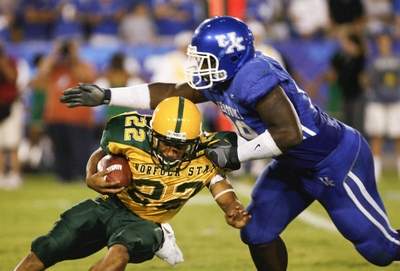 As previously noted, the Washington Redskins made history last week when they selected Kentucky defensive end Jeremy Jarmon in the 2009 Supplemental Draft. Never before in team history had they participated in the “bonus draft,” so to mark this festive occasion we bring to you Jarmon’s first interview as a member of the Redskins.

On if the amount teams that attended his workout last week raised his stock:

“I don’t know how much it helped my stock but I know there were several teams that were interested in me and that I could come in and contribute to their program. The Redskins happen to be one of those teams and Coach Palermo ran my workout and was talking to me during the workout and said he was very impressed by the way I was moving and how well I was performing some of the drills. I’m sure that my performance and not the presence of 18 teams attracted the Redskins to me.”

On what the past couple of months have been like:

“There have been a lot of ups and downs. When I found out in May, I was real disappointed at the time when the ruling came out and that was definitely a low point if not one of the lowest points of my life so far but I started to get over it. My teammates, coaches and friends picked me back up. I’ve been moving to Nashville for the past four or five weeks and working out down in Franklin, Tenn., at D1 [Sports Training & Therapy] it kept my mind off of it and got me back in the football environment. Some of the Titans guys and high school guys were working out there so I didn’t have as much time to think about everything that had happened. It just gave me time to focus on football and that’s something that I love to do. These past few weeks have been hectic talking to teams but its all been worth it and under the circumstances, it’s the best situation for me and I’m really excited about moving to D.C.”

On how much he considered the NFL Draft this past April:

“Not very strongly. I planned on coming back to UK. I talked with Micah Johnson, our middle linebacker who was testing the waters and All-American cornerback Trevard Lindley, who was also testing the waters. They were in no hurry to leave, we were having fun there and we were all coming back and I really didn’t consider it too much.”

“I feel like I play with good leverage. I also feel like I am very quick. Areas I need to improve on are my strength. Coach Hastings is going to do a wonderful job helping me get stronger, get more flexible and things like that over that next years of my career. The Redskins is going to be a great place for me to be. They have a lot of great coaches, a lot of great players and we’re going to get better.”

On coming to Washington and playing with veterans:

“I know Phillip [Daniels], he’s a veteran guy who’s done an outstanding job in Washington during the past few years. I’m excited about the possibility of lining up next to big Albert [Haynesworth] the guy the Redskins picked up during the offseason and there are a lot of other guys who have been playing for five, six, seven years. And you have Phillip who’s a 13- or 14-year veteran and I’m sure he’s seen just about everything in the NFL that could be done to someone. I’m hoping to just get in and land under the wing of some of those guys and learn and follow in their footsteps.”

On impressions of the Redskins’ evaluation process:

“I really enjoyed talking with a lot of the office guys on the phone. Vinny was great. I had a chance to meet with him down in Lexington and also Coach Palermo and a couple of the other guys that were there. Just the impressions I got from them – they were honest. We sat around and had interesting conversations talking about issues that were football related and non-football related. I really just think they wanted to sit down and get to know me as a person and figure out exactly who I was, and during those conversations I got to get to know about those guys as well. I am just really looking forward to coming to Washington. It was definitely the team that I wanted to end up coming to. I actually sent Vinny a text message this morning. I got his number and I told him I want to be a Redskin – make it happen. It’s the place that I wanted to be and I am just glad that dream has come true for me. He responded in the ultimate way to my text message by drafting me today.”

On being behind in the learning process heading into training camp:

“It’s definitely going to be a test. I feel like I’m a pretty smart guy. The number one thing is trying to get adjusted to the area and as soon as I can get a playbook I need to jump into it and get to learning the plays and formations and sitting down in the film room and putting the plays to the video to see what they look like and see how guys play. I want to try to go into camp with an idea of what I’m supposed to do on each and every play. So I’m going to busy from the time period that I get to Washington next week learning and preparing myself as much as I can and I think I am going to do an adequate job of learning the base defenses and moving from there.”

On why he was suspended by the NCAA:

“I went out and purchased a dietary supplement over the counter in Lexington with the hopes of losing some weight. I had just come off the season, I had some tendonitis in my shoulder after the season and the doctor had diagnosed me with a mild case of tendonitis in my left shoulder. It pretty much made me inactive so I wasn’t to lift weights, I wasn’t to run and condition. I was out of football for about 6-8 weeks. That was from the time period of the bowl game – the date was around January 12th when we returned to school – and around January 19 to about mid-March that I was inactive. During that time period, I did not want gain any unwanted weight in the time period which I was inactive so I began to watch my weight and watch what I was eating and began to take an over-the-counter dietary supplement. About four days before the NCAA came in with a random drug test I went to our head trainer Jim Madaleno and I asked him what was going to happen here over the next few days and he said I was going to get a cortisone shot in my shoulder so at that time I asked, ‘I’m taking supplements – taking some fish pills. Do I need to get off of anything so it doesn’t interfere with the cortisone shot?” His response to me was, ‘Whatever you’re taking get off of it for now, let’s get this cortisone shot so you can get going for spring ball.’ About four days after that conversation the NCAA came in and announced that they were going to do a random drug test and I found out about my status on March 21 after I returned from spring break because I had been out of the country. If I hadn’t been out of the country I would have found out about a week earlier.”

On what the dietary supplement was:

“I don’t know if I am going to release that. The team knows about it. Other teams know about it. I’ve been upfront with them. I don’t know if it’s something at this time that I should release.”

On if it was an issue in supplemental draft process: