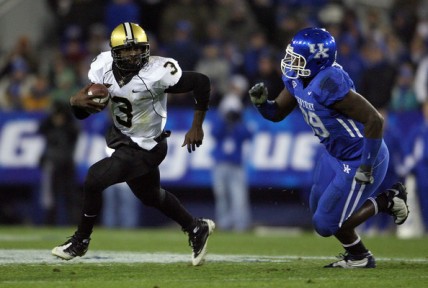 [Quick note for those who’ve noticed the lack of updates – we’re in Germany this week. Bear with us and we’ll be back in time to dive right into training camp coverage. Thanks.]

For the first time in team history, the Washington Redskins participated in the NFL’s lesser known draft – selecting defensive end Jeremy Jarmon in the third round of the 2009 Supplemental Draft. Shortly after, Vinny Cerrato, the team’s vice president/football operations spoke with reporters to explain the move.

On what he liked about Jeremy Jarmon:

“The number one thing is, when he applied to the supplemental and we got his name, (Director of Player Personnel) Scott [Campbell] first looked at him, then he called (Area Scout) Bill Baker. Bill, who was scouting that area, checked him out, you know, character and all that. That came back good. Then Scott watched him on film and liked him on film, Bill Baker liked him on film. Then Scott and I sat down and watched all his tape, and liked him on film. Then we went down to the workout, Scott, myself, and then (Defensive Line Coach) John Palermo was there too, and talked to all the coaches down there, talked to the trainer.

“The kid is an articulate kid, has already graduated in Political Science, he is only 21 years old, and, you know, he made a mistake taking the dietary substance. He went around the corner from the facility there, and got a dietetic. But, Scott and I and Palermo, we took him to dinner, spent like three hours with him that night liked his personality and thought he would fit in with our guys, thought he was a lot like our guys, personality-wise. Once we did that, we talked to (Owner) Dan [Snyder] and Jim Zorn after the workout and said we really liked this guy, and then the kid flew out that Saturday and had dinner with Dan and Jim Zorn in Aspen. Then they liked him a lot too, and then we all talked about it and said that we should do this. We knew that we would have to give a third round pick to get him, because we knew that we wouldn’t get him if we put in a four because there were too many other teams.”

On how he will fit in at defensive end:

On when and where the workout took place:

“It was July 8, in Lexington Kent., at the University of Kentucky.”

On how much he will help right away:

“I wouldn’t say he is a project. I think he will be able to help on special teams right away because he can run so well. And he is coming into a situation where he’s got a chance to learn from two great veterans in Phillip and Renaldo. So there is no pressure on him, where he has to do it. What he has to do is come in and learn from Phillip and Renaldo is what he needs to do.”

On Brian Orakpo’s Progress, and what this changes:

“Orakpo is the exact same as what he was. This does not change anything with Brian.”

On how the contract will work:

“He is the nineteenth pick of the third round. So that is what his slot will be and we get more rookie pool money tomorrow.”

On Jarmon’s suspension, and whether he spoke about it with the team:

On Jeremy addressing what happened in a press conference after being suspended:

“I think it showed what type of kid he was. And that’s the type of guy we want in our locker room. You know, the type of person he is, we thought he fit perfectly with our guys. He would fit well in a room with them.”

On whether he was double-teamed a lot in college, and if that contributed to a lesser sack total in 2008 than 2007:

“I asked the coaches that, and they said, hey, we don’t have a lot of stars here so when the other teams find out who they are, they try to take them out of the game. But actually, I watched 2007 film and then 2008, and I thought he was a much better player in 2008 than in 2007, so I think he has a good upside to him.”

On any lingering issues with his shoulder:

“No, he missed two weeks at the end of the year. He had some tendonitis in his shoulder, but he went and got a physical with Jim Andrews and all that. We went through all the records with the trainer, Scott Campbell, and myself. He started lifting again right after. He missed two weeks; it was just the wear and tear of the season, and then he took two weeks off, and then he was cleared to go back lifting.”

On bulking him up:

“The thing about it was, he played between 280 and 285, and then he has been in Nashville training with, I can’t remember the group of people he was training with, but once he got suspended, he couldn’t work out and stuff at Kentucky. He did it on his own, went and got these people and trained with them, and he was in good shape at the workout. I was impressed with the type of condition he was in, and I think the strength coaches and their coaches were quite impressed that he was at 280, and worked out the way he did. I think his weight, whether he plays at 280, 285, wherever he will be in a year, our strength coaches will put on good weight. As he gets stronger, he will get more lean mass and those type things. So he may be 285.”

“No, he was the only one drafted. But I know a lot of teams, talking with some of the other media people, and I know from talking with his agent, and I got a text from one team that was picking very, very high in the fourth, they thought they were going to get him.”

On whether someone will be released to make room:

“When he signs. We’ve still got to release three guys. When we sign our three draft picks that haven’t signed, we will be releasing three guys. You’ll see that when we sign somebody, somebody’s got to go.”

On the importance of getting younger with Brian Orakpo, and now with Jeremy Jarmon:

“I thought that it was a situation where you get a chance to get a big defensive lineman, and he gets the chance to come in, learn from two veteran guys. He is 21 years old, and he has got the size. To me, in next year’s draft, if he had gone through the combine and everything else, the guy probably goes in the second round, cause D-linemen always go high in the draft. So I think we got the chance to get a quality player at a quality price. I don’t think we could have got him in the third, come next April. And this way, he is a year ahead. For our third-round pick next year, we are getting a year of his work already into it. When we would have made the pick, he has already had a whole season and part of an off season already.”

On if this is the first time he has taken part in the Supplemental Draft with the Redskins?

“Yeah, first time, so we didn’t know the whole process. I never did it is San Francisco, so it’s a first. And we were just sitting there, and one o’clock was the first round, and it was 10 minutes and you email in, we’re not interested. Second round – same thing, and then third round – ‘we’ll take him with our third.’ Then we were waiting for the email back saying whether we got him or not.”