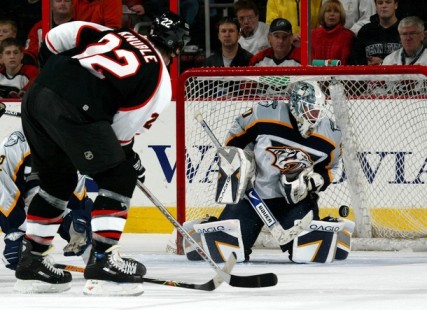 While we were hanging with coach Bruce Boudreau at Congressional Country Club yesterday, the Washington Capitals, who promised to be bystanders during the NHL’s free agency period, made a quick splash on day one, signing forward Mike Knuble away from the Philadelphia Flyers.

The soon-to-be 37-year-old winger, who, unlike the majority of his new teammates in D.C., is comfortable crashing the net and scoring short-range goals, signed a two-year deal worth $2.8 million per year.

Shortly after the signing, the Capitals announced that Knuble will play on the team’s top line alongside superstar Alex Ovechkin and center Nicklas Backstrom, meaning he’ll effectively be replacing free agent forward Viktor Kozlov (who made $2.5 million last season and is likely headed to Russia to play in the Kontinental Hockey League).

So basically, using history as our guide, we see the Caps are getting 11 more goals and six more games out of Knuble than they would out of Kozlov per year. Of course, you could just look at last season, when Knuble finished with 27 goals, 20 assists, 47 points in 82 games and Kozlov had 13 goals, 28 assists, 41 points in 67 games and see the team is getting an upgrade.

Or as Capitals general manager George McPhee said during a conference call with reporters yesterday, “We replaced a 13-goal scorer with a 27-goal scorer, and the team is better as a result.”

Kozlov was maddening at times because he possesses the big frame that NHL general managers desire (he’s 6-5 and 235 lbs.). But instead of crashing the net to screen goalies and be in position for rebounds while Ovechkin fires his eight to 10 shots on goal a game, Kozlov was always more comfortable skating around on the fringe. It’s as if he’s always seen himself more as a speedy, smaller wing than a big, burly grinder willing to do whatever is necessary to help his team.

By all accounts, Knuble is just what the doctor ordered. His teammates loved him in Philly, and it’s not a stretch to think the same won’t hold true here in Washington. He plays in all three phases of the game (powerplay, penalty kill and even strength) and has no issue going to the goal. He’s not flashy and isn’t concerned with making highlight reels, he just wants to help his team win. It’s not always pretty, but Knuble gets results. And on a related note, the Caps are a better team because he’s on the roster.