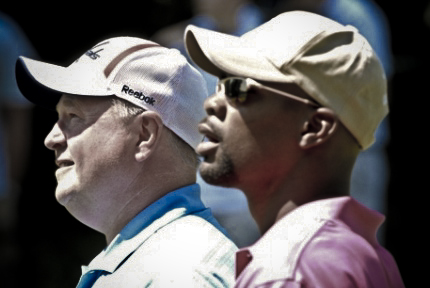 Wednesday was a fun day for local sports fans. Not only was the biggest name in professional sports, Tiger Woods, in town to host his tournament, but a handful of local sports celebrities were also on hand.

Quarterback Jason Campbell and wide out Antwaan Randle El of the Washington Redskins, and coach Bruce Boudreau of the Washington Capitals teamed up with former Masters winner Mike Weir during the Earl Woods Memorial Pro Am at Congressional Country Club and we were fortunate enough to walk 18 holes with them.

Sure, Woods opted to play with Dallas quarterback Tony Romo, one of the better golfers in the NFL, but when it came to having fun, no team could compete with Team Weir on this day. To share a glimpse of the shenanigans, we present to you our interview with Boudreau, which was conducted as the guys began the back nine of their round.

Both of the Redskins players openly admit that you’re carrying this team for the D.C. guys. How would you rate your game?

“Well then, I’m playing AWESOME,” Boudreau said, still cracking up. “I don’t know what to say after that.

Now Shaun Suisham, the Redskins Canadian kicker, says he’s sticking with you and Weir because you’re a safer bet than siding with his teammates – Campbell and Randle El. What do you say to that?

Suddenly we were interrupted again – this time by the one professional golfer in the bunch.

“What’s this, a TV timeout, Bruce,” asked Weir with a smile. “You’ve got Pierre McGuire over there talking to you between the benches during the game.”

(Laughs) “He’s no Christine Simpson, I know that,” Boudreau fired back, gladly kicking us in the process.

“No, this is the first time in my lifetime I’ve ever been able to do something like this,” he said. “And quite frankly, to do it with one of your heroes is pretty cool.”

We know you can coach hockey, but we don’t know much about you on the golf course. Tell us a little bit about your game.

“I can … I don’t lose balls,” Boudreau said, immediately showing he’s better than Campbell and/or Randle El. “You know, I hit it straight and struggle – just like every other duffer – around the green. If we could just play tee to green I’d be pretty good. But I’ve got to play the ones around the greens as well.”

And what’s it like playing alongside Weir, who you’ve said you’re a huge fan of?