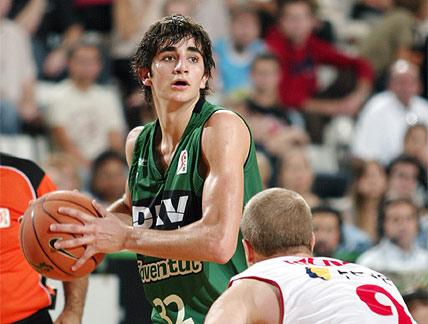 Call us crazy, but we’ve always strived to uphold the motto – work smarter, not harder.

If we’re going to continue to talk in clichés, then we could also throw in that we don’t go out hoping to recreate the wheel or some other equally trite phrase that essentially means use history as your guide or you’re doomed to repeat it.

Basically what we’re saying is, if you’re the Washington Wizards general manager Ernie Grunfeld and you’re sitting at your desk wondering what the best way to build a winning team … well maybe you should look at other successful business models and copy that formula.

The most baffling part of this is that all Grunfeld really needs to do is walk down the hall of the Verizon Center and pay a visit to Washington Capitals general manager George McPhee and he’d be on the right path.

We bring up Grunfeld and McPhee because last week gave locals a unique chance to compare and contrast two different men going about building their teams two completely different ways.

On the one hand you have “Big Ern,” who has openly admitted he’s in “win-now mode.” He feels he’s got a veteran team with a small chance to win a title and should add the last few pieces in hopes of bringing owner Abe Pollin a second NBA championship.

Grunfeld sees his current roster, led by Antawn Jamison, Caron Butler and Gilbert Arenas, in a “glass half full” kind of light. In four of the six years he’s been calling the shots here in D.C. these guys have been good enough to get the Wizards into the playoffs, which is no small feat for a franchise long considered a league doormat (see: the Wes Unseld Era).

Once your team is regularly able to qualify for the postseason, we guess it’s easy to convince yourself that you’re just a piece or two away from the league’s elite. There’s no sense in bringing in young and inexperienced players that your coaches will have to spend extra time and effort whipping into shape just so they can ride the bench, right? In the immortal words of Lee Corso, “Not so fast, sweetheart.”

On the other side of the spectrum you have “GMGM,” who is now reaping the rewards after having made one of the toughest choices a general manager can make. You see, a few years back he was in the same situation as Grunfeld’s Wizards are now. His veteran (i.e. – aging and injury prone) Capitals were good enough to make the playoffs every year, but not do any real damage once they got there.

But instead of sitting back with his feet kicked up on the desk, McPhee decided to blow up his roster and rebuild. He knew the Caps were never truly going to be a threat to win a championship unless he built the franchise the right way. He knew there would be ugly nights during the grueling rebuilding process, but at the end of the day he knew it would be worth it.

We bring this up because we couldn’t help but chuckle last week as the fifth pick in the NBA draft, the one the Wiz traded away two days prior, was used to select future superstar point guard Ricky Rubio. At just 18, this kid has already earned a reputation as a once-in-a-generation talent – a kid with amazing passing abilities and even better court awareness.

Grunfeld has said since the draft that the only player he would have been mad about missing out on had they fallen to the fifth pick after he traded the pick away was Oklahoma forward Blake Griffin. Of course he did. Because what good would it do for him to openly question himself two days after trading the pick to Minnesota?

But the truth is, Rubio is the kind of kid who makes everyone around him better. Sure, there’d be an adjustment as the rest of the Wizards got used to having a legitimate point guard running the offense (as opposed to Arenas’ shoot-first, pass-second mentality), but that’s not a bad thing.

If you want to run and gun, then why wouldn’t you want Rubio, who is more than capable of setting up the rest of the roster for easy baskets with his highlight-worthy passing game? The Phoenix Suns became “must-see TV” once Steve Nash became their point guard. When’s the last time the Wizards were in that category?

This current construction of the Wizards is not championship material. Even with a healthy Brendan Haywood and the additions of Mike Miller and Randy Foye, this team is still not a lock to be an elite squad in the improving Eastern Conference. Not when Cleveland, Orlando, Boston and others continue to find ways to retool their rosters.

And if you’re not willing to blow it up and start over like the Caps (or even the Portland Trail Blazers or Oklahoma City Thunder), then you could have at least added a player like Rubio that would, from day one, greatly improve your rotation.

Instead we’re left with a Wiz team that will have to overachieve to win 50 games next season. And while that’s unlikely, here’s what we’ll more than likely see – this same team, that’s won just one playoff series since Grunfeld came to town, will end up finishing right around .500 and getting eliminated in the first round. Again.

D.C. sports fans can get mad about it or they can do something about it. Show your support to the Capitals. It’s the least you can do to say thanks to the one team around town with a legitimate chance to bring home a title in the near future. Meanwhile, stay away from this Wizards team. You already know how it’s going to end. History has shown you. Hopefully, unlike Grunfeld, you’re smart enough to take notice.