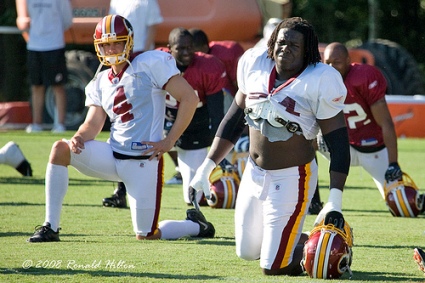 For whatever reason, whenever someone brought up the move to us over the weekend, they inevitably ended up saying, “They must really like what they see in Mike Williams to let Jansen go now.” To which I replied,”Not if they’re going off of what they saw at minicamp.”

You see, Williams barely participated in minicamp. At 400 lbs., Williams is simply in weight-loss mode so he can get down to a realistic size and then the evaluation phase could begin. For most of camp the rotund lineman was rocking a pair of sweats bigger than most camping tents and was “jogging” around the field while offensive players were busy actually working on drills and such.

But the player who surprised us most that weekend was offensive lineman Stephon Heyer, the third-year pro who was the first player to break Jansen’s stranglehold on the right tackle position a season or two ago.

We’ve never been overly enamored with Heyer’s game in seasons past, but during camp we noticed something that gives us hope this is the year he makes the jump from a so-so player who folks typically only notice when he makes a poor decision, like costing rookie wide out Devin Thomas his first-career receiving touchdown because Heyer took a cheapshot at an unsuspecting Arizona Cardinals player 20 yards away from the play, to a bona fide NFL starter.

And here’s the kicker – it had nothing to do with being on the field.

After practice on the third and final day of minicamp, we ran into Heyer while waiting to knock out a couple of interviews. We started chatting and were immediately shocked at just how different the former University of Maryland product came across. In our interactions in previous seasons Heyer always was a quiet kid who tried to keep his head down when the media was around and in the rare cases when he was asked to speak, often appeared to lack confidence in what he was saying. But on this day it was as if Stephon had taken a crash course in swagger with Fred Smoot.

He volunteered that as far as he was concerned, this was his junior year as a pro and therefore it is officially time to get past the “rookie mistakes” that plagued his game in the past. He said that a lot of people have high expectations for him coming into this season, but that no one expects more than he does of himself. He talked about not being in a learning phase anymore, rather he knows what the plays are and is comfortable with what the coaches are asking him to do.

After we finished talking about that, the topic of conversation switched to the Washington Capitals, who had just advanced to the second round of the playoffs. Again, Heyer seemed like a completely new person as he told us about attending his first-ever Game 7 of any sport and how much he appreciated seeing the town rally around one of its teams. You could easily sense that Heyer would love to see the town in a similar frenzy over an extended Redskins playoff run.

When we walked away, we stopped some of the other media types and asked if they had noticed the same transformation. All agreed that this was our first glimpse at a new and improved Stephon Heyer. Even though we’re one of his biggest critics, Heyer spoke with and carried himself with a level of confidence that had us halfway convinced that he’s turned the corner and is ready to anchor the line on the right side for the foreseeable future.