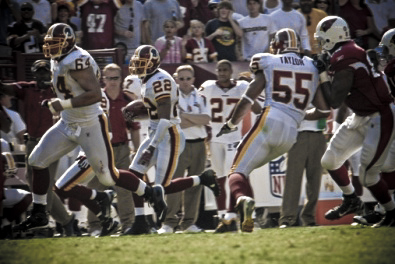 “He’s not smart enough.”
“He can’t work in the West Coast offense.”
“He’s not Zorn’s guy.”
“He wasn’t the one who got them into the playoffs last year, Todd Collins was.”

That’s just a small dose of the crap more than a few Redskins fans were spewing about Redskins quarterback Jason Campbell after the season-opening loss to the New York Giants. You’d have thought Danny Wuerffel was back behind the center the way folks were bashing him. At that point I really had to question everything – sure, Campbell didn’t look great in New York, but neither did anyone else on the roster. Were people calling for LaRon Landry’s job after he got bowled over by Giants running back Brandon Jacobs? No. But people love a quarterback controversy in this town, so it became the trendy thing to do.

Let’s fast forward two weeks and strangely, none of those twits are anywhere to be found. The offense, still led by Campbell last I checked, has put up 53 points these last two games and, for the first time in a long time, is actually capable of putting together time-consuming drives and connecting for quick strike touchdowns.

Against the Cards, Campbell was nearly perfect, completing 22 of 30 passes for 193 yards and two touchdown passes. He connected on 73 percent of his passes for a downright nasty 112.2 quarterback rating. If that ain’t getting it done then I don’t know what is. Through three games (including the Giants game, mind you), Campbell has connected on 63 of 91 passes for 647 yards, four touchdowns, no interceptions and no fumbles. That’s 65.6 percent, ladies and gentlemen. That also translates to a quarterback rating of 100.1 for the year. Speaking of QB ratings, Campbell has had a better rating that each of his three opponents – Eli Manning, Drew Brees and Kurt Warner – this season. Looks like the haters are going to have to find someone else to fixate on.

2. “Bombs Over Baghdad” by Outkast

Redskins receiver Santana Moss scored the eventual game winner on a 17-yard touchdown from Campbell in the fourth quarter. That’s noteworthy because it marked the sixth straight contest, including playoffs, in which Moss has caught a touchdown, tying a Redskins record held by Bobby Mitchell, who did it back in 1964.

Through three games, Moss has 19 catches for 276 yards and three touchdowns – ranking Moss fourth in NFL in receiving yards. On a team that took something like 12 games to get a receiver a touchdown last year, it goes without saying that Moss’ contributions are greatly appreciated. A healthy Santana Moss will go a long way in helping the continuing development of Campbell and preventing defenses from stacking eight men in the box against running back Clinton Portis and the ground game.

With just under nine minutes remaining and the Redskins leading the Cardinals 24-17, Campbell rolled out to his right to avoid the pressure and connected on a 68-yard touchdown bomb to rookie wide out Devin Thomas to all but end the game. After being called for two offensive pass interference calls earlier in the game, Thomas went from the dog house to the penthouse. Just one problem though – the play was called back after offensive lineman Stephon Heyer was flagged for a blindside hit on Darnell Dockett.

Thankfully, the boneheaded play didn’t end up costing the ‘Skins the victory, but it did take away Thomas’ first career touchdown. The stat sheet shows Thomas finished the day with one catch for seven yards, but in an instant Redskins fans saw a glimpse of what the rookie receiver is capable of.

Last week, safety Reed Doughty missed the game because of a stomach virus. In his place, rookie safety Chris Horton stepped up big time – hauling in two interceptions and a fumble recovery, earning NFC player of the week honors in the process. This week, the only time anyone noticed Doughty was when he bit on a fake by Cardinals receiver Larry Fitzgerald, who breezed by him for a 62-yard touchdown in the third quarter. If Doughty wants to avoid the ire of Redskins fans looking for a new whipping boy other than Campbell, he needs to step up his game sooner rather than later.

These Washington Redskins are a team fans can get behind. They can score points in bunches, clearly illustrated by their offensive production (26.5 point per game) these last two weeks. On defense, the philosophy is always bend, but don’t break. While no one is thrilled that Cardinals running back Edgerrin James rushed for more than five yards a carry, the Redskins (Doughty’s play aside) did a solid job of preventing the big plays the Kurt Warner-led Cardinals are capable of. In fact, the ‘Skins held the Cardinals to 17 points Sunday, ending a streak of 10 consecutive games in which Arizona had scored at least 20 points, the longest in the league.

Redskins defensive back Carlos Rogers recovered a fumble and picked off Warner yesterday. Linebacker Rocky McIntosh forced a fumble for the second straight game. Defensive end Jason Taylor batted three balls at the line of scrimmage. And most importantly, the Redskins are winning the turnover battle (they’re a plus five for the year in turnovers). As long as the Redskins avoid careless mistakes on offense and continue to make the one or two game-changing plays on defense, there’s a chance this team may make some noise this season after all.