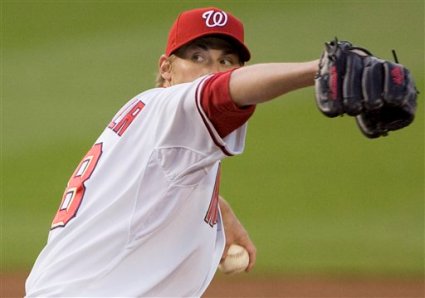 All eyes were on the mound last night as Washington Nationals rookie pitcher Ross Detwiler made his professional debut.

As previously mentioned, the 23-year-old was forced into action because of injuries and ineffectiveness with Scott Olsen. Things got off to a rocky start for the Nats when shortstop Christian Guzman picked up two errors in the first inning, but Detwiler still looked sharp. In fact, Detwiler was all fans could have asked for – throwing 84 pitches, 61 of which were strikes. Unfortunately, things went from bad to worse after Detwiler hit the showers.

Nats pitcher Garrett Mock entered the game in the sixth inning. He threw just 15 pitches and here’s what happened – a walk, a wild pitch, a hit batter and a two-RBI double for good measure. No sense in letting the kid get a win in his first outing. Wouldn’t want it to go to his head, would we now? So Mock did us all a favor and picked up another loss for the league’s doormat, who are now 11-26 on the year.

Here’s the part where we state the obvious about the Nats’ 12-7 loss to the Pirates Monday night. They lost while scoring seven runs. For those who haven’t been paying attention (and judging by the attendance figures, that’s the majority of you), this has become a troubling trend for the home team.

Over the last nine games, the Nats have scored 57 runs (for the mathematically challenged, that’s more than six runs per game). There’s just one problem. The Nationals have gone just 1-8 over the same span because they’ve given up an astounding 78 runs (more than eight runs per game).

So while it’s awesome to see Guzman batting an NL-best .385 on the season, followed by first baseman Nick Johnson (.336 batting average), third baseman Ryan Zimmerman (.358 batting average) and outfielder Adam Dunn (.286 average and 11 homers), they basically need to score double digits just to have a chance at victory these days.

Oh, and just so we’re not only blaming pitching, the Nationals lead the league in errors with 37. Yes, they have 37 errors in 37 games. And yes, if you found a way to screw up every single day you came to work, you certainly wouldn’t be a millionaire. You’d be unemployed. But these are growing pains.

And while there are plenty of negatives begging to be dwelled upon, we’re choosing to focus on a positive. In his first pro game, Detwiler delivered. There are a dozen things around him to be concerned about and there’s no guarantee that he’ll be nearly as sharp his next time he takes the mound, but on this night, Ross Detwiler gave Nats’ fans a reason to smile.