stepping up to the plate 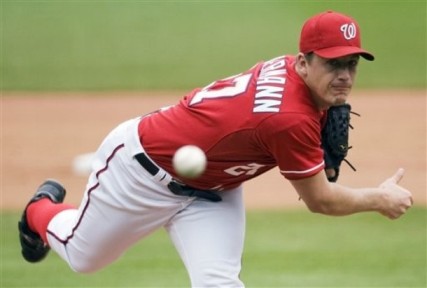 We’re headed into uncharted territory here on the blog. With our hockey season having come to an abrupt ending and football season not quite here, we’ll be turning our attention to that local baseball team that continues to try and find its way. Before we get to the on-the-field stuff, we wanted to take a broader view of the state of the franchise.

Let’s start with what we know.

The biggest reason the Washington Capitals have become one of the best and brightest teams in hockey is because general manager George McPhee and his talent evaluators are consistently able to turn high draft picks into name contributors.

Forget about top five picks like wing Alex Ovechkin and center Nicklas Backstrom, the Caps are also able to find guys later in the draft. Defenseman Mike Green (29th overall), goalie Simeon Varlamov (23rd overall) and forward Alexander Semin (13th overall) are just a few of players who fit into this category that will keep the Capitals competitive for the next several years.

Conversely, we have the Washington Redskins, who seemingly show up on the day of the draft with a plan to “just wing it.” When a team like the Baltimore Ravens or New England Patriots goes with the “best player available” draft strategy, more times than not they come out on top and walk away with a cornerstone for their franchise.

When the ‘Skins front office tries the same approach, they end up using three second rounders on pass catchers who fail to contribute. Sadly, this is actually the preferred method, since their other alternative is to give away draft picks for guys named Jason Taylor, Brandon Lloyd and T.J. Duckett. This is why clown music should be played in the Redskins’ war room on draft weekend.

Somewhere in between the Caps and ‘Skins we have the Washington Nationals. Like the Caps during their vaunted rebuild, the Nats seem content to suffer in the short term while stocking up the franchise for better long-term stability and depth. Fans might have to partake in a 100-loss season now, but the promise of better days led by Ryan Zimmerman, Jordan Zimmermann and others is supposed to ease the pain.

It’s great in theory to say “we’re blowing it up and rebuilding through the draft,” but at the end of the day you’ve got to have the right people in place to identify and select talented players in the draft. Otherwise, you’re destined for mediocrity.

So what can we say about the Nationals front office and the job they’ve done thus far in restocking the proverbial cupboard?

Um … not much. Other than guys named Zimmerman(n), the jury is still out. Last year’s first rounder was spent on Aaron Crow, a wonderfully talented pitcher out of Missouri. But the team failed to sign him and basically has nothing to show for the ninth pick in the 2008 draft.

The first rounder from 2007 is a pitcher named Ross Detwiler from Missouri State. He’s currently the second ranked prospect in the Nats’ farm system (behind Zimmermann) and will be taking the mound for Washington tonight. Ideally Detwiler wouldn’t be pitching at the major league level today (he’s 0-3 with a 2.96 ERA with Double-A Harrisburg), but such is life with the Nats. Injuries and ineffectiveness with Scott Olsen mean we get our first glimpse at Detwiler sooner rather than later.

Regardless of how Detwiler fares tonight he’s in better shape than Chris Marrero, the team’s 2006 first rounder (and the third ranked prospect in the organization). We attended a Potomac Nationals game last week and saw Marrero strike out in consecutive at bats in a total of just six pitches. This guy makes a living as a power hitter and it’s okay to swing for the fences on occasion, but he wasn’t even close to making contact on this day. We’re hoping we just caught him on a bad day.

And don’t even get us started on Marrero’s Potomac teammate Stephen King, a third rounder from the same 2006 draft. We’ve nicknamed him “Dorn” because it looked to us like he was fine playing third base as long as he didn’t have to get his uniform dirty.

As a rule, baseball players take longer to develop than football or hockey players. We know this and fully understand it. But because the situation is so destitute with the big league club, a lot of these youngsters are naturally being asked to play at an accelerated level. Some are responding well. Others are not.

So while we’re only 36 games into the season and it’s already safe to say the competitive portion of this season has come and gone, there are still reasons to tune in. Tonight, it’s Detwiler. And who knows, maybe the kid comes out and is able to put it all together against a very beatable Pittsburgh Pirates squad. And if he can stick around, then suddenly you’re looking at a rotation with John Lannan, Shairon Martis, Jordan Zimmermann, Detwiler and a spot reserved for Stephen Strasburg come this summer. If that doesn’t give you a reason to smile then nothing will.