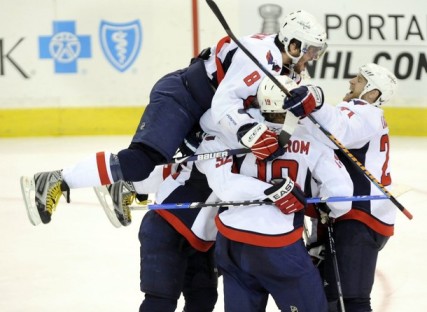 Isn’t it amazing what can happen when you stop screwing around and simply put the puck on the net?

The Washington Capitals finally played as if their season was on the line and, thanks to a David Steckel deflection, defeated the Pittsburgh Penguins in overtime 5-4. After losing their last seven-consecutive overtime games, the Caps will now host the Penguins in a do-or-die game seven Wednesday at the Verizon Center.

So far this series has played out fairly consistently – the Penguins have been the much more aggressive offense, generating twice as many quality scoring chances as Washington, while the Capitals have been much streakier. When they’re clicking, they’re impossible to beat. When they’re content to get “cutesy” with the puck and force low-percentage passes in high-traffic areas … not so much. Just getting the Caps offense to stop trying to make the extra pass and fire a shot on net at times has been maddening.

Here’s the kicker – you don’t even have to shoot, so long as you’re aggressive in the offensive zone. The Penguins proved that when they won game five without ever shooting, with a Evgeni Malkin pass deflecting off of Caps defenseman Tom Poti and past Simeon Varlamov for the overtime winner.

In fact, after seeing so many pucks deflect off of Capitals defenders into their own net, we (half) joked that the only way for the Caps to defeat the Pittsburgh Penguins and force a game seven would be to have Washington defenders camp out in front of the opposing net and wait for the puck to hit them and bounce into the net.

Thankfully, things didn’t have to come to that.

Instead, Caps fans were treated to a much sweeter shot of redemption, with the game-winning goal in Monday night’s game six coming from center David Steckel, who has played a masterful series and yet was known around town as the guy who had a chance to steal game five but couldn’t bury a bouncing puck into the Pittsburgh net in overtime.

After winning a faceoff in the offensive zone, Steckel crashed the net and was in the right place at the right time when teammate Brooks Laich fired the puck in his general direction. Steckel turned the blade of his stick and redirected the puck past Pens goalie Marc-Andre Fluery and sent Caps fans into a frenzy.

And while we’re on the subject of redemption, it was nice to see forward Alexander Semin finally get into a groove. The Capitals player who shined the most during the New York Rangers series (with five first-round goals) had yet to make an impact against the Penguins through five games.

But with the Caps facing elimination, Semin finally got things going – avoiding the ill-advised decision making that drives his coaches and fans insane, while also drawing two Penguins penalties that each resulted in goals for the good guys. The stat sheet only shows Semin with two assists, but he was a much bigger influence in the Caps living to play another day.

And the man of the night was forward Viktor Kozlov, who coach Bruce Boudreau nicknamed the “Unsung Russian” earlier this year. Kozlov, known mostly in NHL circles as a great regular season player who vanishes come playoff time was everywhere Monday night. He had two major goals that provided the secondary scoring (i.e. – goals from folks not named Alex Ovechkin or Niklas Backstrom) that has been sorely needed this series.

The Capitals are now 6-1 in elimination games over the last two years. They’re old enough to know what’s at stake and yet, young enough to come out and play like they don’t give a damn. Sure, things looked scary when the first period ended and the Caps were trailing 1-0 on the scoreboard and 18 to 5 in shots, but they got better as the game went on and are finally starting to resemble the offensive powerhouse we all know and love.

There’s no guarantee that they’ll be able to show up Wednesday night and eliminate the Penguins, but the fact is, they’ve got a shot. And really, at this point in the season, that’s all you can really ask for.