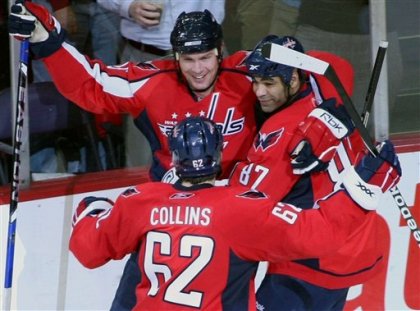 Add in the NHL’s most exciting player, Alex Ovechkin, and the league’s most enigmatic player, Alexander Semin, and it’s clear that the Caps are a team that Mother Russia could love.

While everyone in the Verizon Center focused on those three highly-touted players, Capitals right wing Viktor Kozlov did his best to remind folks he’s got some game too.

“He’s the unsung Russian,” Coach Bruce Boudreau said. “He just goes out and does his business. When he’s on top of his game, you don’t see him hitting a lot, but he’s strong as an ox. He gets things done.”

[Editor’s note: We don’t want to hurt anything patting ourselves on the back, but the “unsung Russian” quote from Boudreau came in response to our only question in the post-game press conference. So the Associated Press, the Washington Post, Comcast SportsNet and everyone else can feel free to thank us later.]

Kozlov opened the scoring, netting a goal that could only be classified as a savvy-veteran move when he used the defenseman as a screen and fired the puck past an unsuspecting goalie with less than four minutes to play in the first period. It should be noted that the Capitals came into the contest with a league best 15-3 record when scoring the first goal, so getting up early on the Western Conference’s worst team was vital.

“If you look at the stats across the NHL, the team that scores first ends up winning,” said defenseman Tom Poti. “It takes the other team out of their game and forces them to change some things. We’ve been fortunate to get the first goal in the last few games we’ve played.”

Blues right wing David Backes tied the game at 1-1 just over nine minutes into the second period on a well-timed deflection. The Blues goal, coupled with a lackluster Washington powerplay, took the wind out of the Caps’ proverbial sails for a bit. Thankfully, Viktor was there to once again save the day.

Kozlov’s second goal of the night was a “Johnny-on-the-spot” play. Boyd Gordon drove the net, but couldn’t get anything on the shot because of a defender draped on his back. St. Louis Blues goalie Ben Bishop got a pad on the puck and it laid on the doorstep until Kozlov snuck in and slammed the puck home for his seventh goal of the season and his first two-goal game of the season.

“The second one was a pretty good play by Boyd Gordon,” Kozlov said. “He basically did everything and I just came in at the right time.”

Clearly this served as a wakeup call because the Caps scored again just 40 seconds later. Capitals right wing Eric Fehr did hockey’s version of a no-look pass to left wing Tomas Fleischmann who was lurking in the high slot. Fleischmann wasted no time firing the puck in the top right corner for a backbreaking goal and a 3-1 lead.

Just 13 seconds into the third period Ovechkin scored a powerplay goal that sent the Phone Booth into hysteria, but once again Kozlov was the man getting it done. Just as it the Blues were about to clear the puck out of the zone, Kozlov appeared from nowhere to keep it in the offensive zone and quickly found Ovie.

The assist gave Kozlov his second three-point night of the season, his first since Nov. 26 against Atlanta and all but assured the Caps kept Varlamov (who finished the game with 29 saves) undefeated.

“St. Louis didn’t give up and it was a hard time until the end,” Kozlov said. “It’s a good thing Simeon Varlamov played good, saved us a few times and we got the two points.”

There was a scary moment with 11 minutes remaining when Backes took a swipe at Semin and then followed it up with a cheapshot crosscheck to Semin’s lower back that floored the talented Russian. If folks want to know why this town loves Ovechkin, then look no further than what happened next. Ovechkin immediately flew straight to Backes ready to throw down to defend his fallen teammate.

“Every time I see him he’s either hitting somebody or he’s getting a chance to score,” Boudreau said of Ovechkin. “Tonight he’s protecting his teammates. What else can you ask the guy to do?”

One final note from last night’s game: He might not show up in the stat sheet every night, but every team in the league should have a guy like Capitals forward Brooks Laich. Not only did he earn a start – pairing up with Semin and center Michael Nylander – but he showed why he’s way more important than any stat sheet would ever indicate while killing center Nicklas Backstrom’s hooking penalty in the first period. Even though Laich lost his stick, he still stuck with the play, caused the Blues player to make a turnover and ultimately ended up finding a way to clear the puck out of the zone. Did we mention he didn’t have a stick?

That kind of hard work and determination from the top guy on the roster on down is exactly why the Capitals are enjoying a five-game winning streak and are playing some of the best hockey in the NHL.