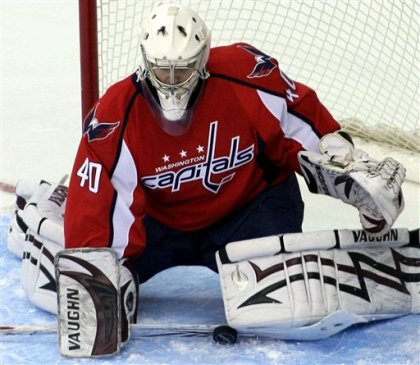 The story of the night for the Washington Capitals heading into the game against the St. Louis Blues Thursday was clearly the home debut of goalie Simeon Varlamov. The 20-year-old won his NHL debut by a score of 2-1 in Montreal last week, so this was D.C.’s first glimpse of the highly-touted rookie.

(For the record, the other story coming into this game was Alex Ovechkin bobblehead night because seriously, who doesn’t love bobbleheads? Okay, where were we?)

Speaking of netminders, Varlamov was matched up against Blues 22-year-old goalie Ben Bishop, who was playing in just his fifth game of the season. With both rookie goaltenders so early into the professional careers, both sported plain, white hockey masks – which is an NHL first since 1973 (in a stat we completely made up).

After seeing the young Russian first hand, we can say this – Varlamov is very quick and very athletic. When he makes a kick save, the first-rounder is talented enough to launch the puck perfectly to a teammate breaking out at the blueline. It’s something Caps fans haven’t seen in a long, long time and actually gives the home team and chance to turn a routine defensive play into a fast break the other direction.

The Capitals defeated the Blues 4-2 thanks in large part to steady play of Varlamov throughout the game. With his team’s powerplay embarrassing itself and many Caps players getting outhustled, there was about a 10-minute stretch during the second period when Varlamov was the only player in a Capitals uniform who didn’t look like he was going through the motions. Had Varlamov not played at such a consistently high level throughout the night, there’s little reason to think the Caps would have picked up their fifth-straight win and improved their home record to 13-1-1 for the year.

“He played well,” said veteran defenseman Tom Poti of Varlamov. “I thought he was really good at challenging the shooters and coming out of the crease. He played sharp tonight and had a great game.”

Doesn’t he seem to have a lot of confidence for such a young kid?

“Yeah, definitely,” Poti said. “He knows his job is to stop the puck and that’s it, and he’s been doing that. My hat’s off to him. He played very good tonight.”

The highlight of the night came with less than six minutes remaining, when Varlamov absolutely stoned Blues left wing Keith Tkachuk, who was on the breakaway.

“I knew (Tkachuk) was going to deke,” Varlamov said through an interpreter. “He’s an older player and I knew when he made the first move I shouldn’t go down so fast.”

With the Blues having closed the score to 4-2 and last week’s near third-period collapse against the New York Islanders still fresh on the team’s mind, that play was huge.

“I thought he played really well,” said coach Bruce Boudreau. “The big one on Tkachuk’s breakaway – it was 4-2 at the time – took the wind out of their sails a little bit. He’s pretty good and I think he’s got a bright future in front of him.”

Through his first two professional games, Varlamov has stopped 61 of 64 shots for an impressive 1.50 goals against average and a .953 save percentage. If there’s something that can rattle him, opposing teams haven’t found it yet.

Goalie Brent Johnson has been stellar this year, but is eligible for free agency after the season and the Caps other goalie, Jose Theodore, hasn’t exactly recaptured lightning in a bottle since he came to town this past offseason. If these first two games are any indication of the type of NHL player Varlamov is going to be, then the team just might have found their long-term solution for the biggest question mark on the roster. Trust us when we say that by all accounts, Varlamov is the real deal.