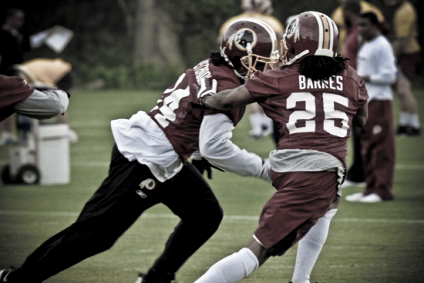 Yesterday, we brought you our one-on-one interview with the Washington Redskins newest addition to the defensive line, Brian Orakpo. Today, we move on to the next guy selected by the ‘Skins in the 2009 NFL draft, Maryland cornerback Kevin Barnes, who the team used their third round pick on. Much like Fred Smoot, we had a few words in store for the rookie.

How you feeling as you go through your first NFL minicamp?

“I feel okay,” he said. “It’s a little different than college. I’m just going to have to come out and have better practices. I don’t think I did too bad, I just know I can do better.”

What in particular is different?

“Coach [Ralph] Friedgen always held a high tempo practice, so I was pretty prepared for it,” Barnes said. “As far as the route running, the coaches told me to slow down because I was pressing too much. Actually, I just need to slow down myself.”

What are you hoping to get out of minicamp?

“Just learn to defense as much as possible, build a relationship with some of the older guys who can help me out,” he said. “That’s pretty much it.”

Obviously you’re a local guy, so what’s it like knowing you’re going to stay in the area?

“Yeah, I mean I get to stay next to my family, my mom gets to come to every game and I can go back and visit my college teammates too,” Barnes said. “I don’t have to worry about going to a new city and making new friends. All my friends are here, so it’s very pleasant.”

Okay, we heard a nasty rumor. What team did you grow up rooting for?

“Aww man … it depends,” Barnes said, clearly knowing where this conversation was heading. “It’s a tricky question. When I lived in North Carolina, I liked the Cowboys. When I moved up here, I didn’t really follow the Cowboys as much. I was up here watching the Redskins and the NFC East period.”

So what you’re saying is you were a Cowboy fan until someone taught you better than that?

Alright, we can respect that. For those who may not be familiar, what do you bring to the table?

“I’m a ball hawk,” Barnes said. “You know, I play the ball very well. Today, I had to work on some stuff because it’s a different style of play, but I’m a ball hawk, a physical corner who will come up, tackle and give it my all.”

Some folks suggest you might be a little light to be running around throwing your body around like that. What do you say to that?

“It’s all about ‘want to,’” he said. “I feel like if I do that regardless, my teammates will see how small I am and show that much more respect because I am willing to throw my body around in there and I don’t really care.”

Does it get old having everyone call you a YouTube sensation?

“Pretty much, but the draft’s over so it don’t matter too much anymore,” Barnes said. “If people don’t think I’m big enough to hit, that shows it right there.”