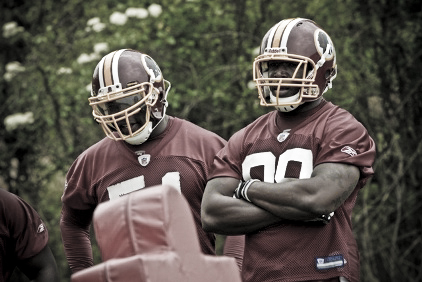 When the Washington Redskins used their first-round selection in the NFL draft on someone other than USC quarterback Mark Sanchez, ‘Skins fans rejoiced. The fact that the team ended up with one of the most dominant defensive players in college football, Brian Orakpo out of the University of Texas, was almost too good to be true. Instead of bringing in a name player at a position which shouldn’t be a priority, the Redskins walked away with a multi-talented playmaker who can get sacks and also drop back into coverage.

We tracked down Orakpo at last weekend’s minicamp to see how he’s adjusting to his first week as an NFL player.

So, it’s finally here and you’re taking part in your first minicamp. How you feeling?

“I’m feeling good,” Orakpo said. “I missed on a couple of my assignments, but that’s just the nature of the game. I know I can get better, but so far it’s been pretty good.”

When the Redskins released the roster sheet for this weekend one of the sides lists you at defensive end while the other calls you a linebacker. Is it safe to say they’re expecting a lot from you?

“Yeah, it’s like getting it all in one,” he said. “We’re just seeing where I fit right now and I’m just going with it.”

What’s the biggest change from your typical college practice to an NFL minicamp?

“Everything is much faster paced,” Orakpo said. “Even though you’re in shorts and jerseys it’s still faster paced. You have to get to your marks and go. It ain’t tippy toeing or nothing like that. Everything is full go.”

So is your head swimming while you adjust to everything?

What do you hope to accomplish during this minicamp?

“Just to get better, man,” Orakpo said. “I’m just trying to be a complete football player and do whatever I can to get better and stay on the football field and win ball games.”

And the fact that you were already a Redskin back in high school. That just makes this that much cooler for you, right?

Keep talking like that and you won’t have any problems surviving in this town, kid.