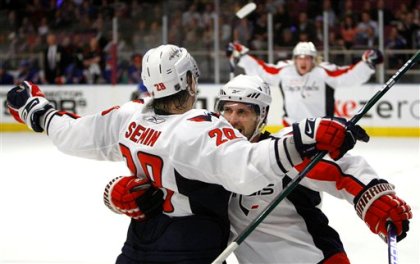 With apologies to the wildly-popular “Rock the Red” campaign, it seems only fitting that a Washington Capitals team of playoff virgins attempting to capture their first postseason series would get on track while sporting white jerseys.

Last night’s 4-0 thumping of the New York Rangers at Madison Square Garden was a much-needed shot of confidence to a Capitals team that had yet to play a complete game this postseason. In game one, the Caps’ offense looked sharp, but goalie Jose Theodore fell asleep at the wheel. Game two featured solid goaltending from rookie Simeon Varlamov, but Washington’s offense took the night off.

Folks started to wonder if this talented, but still very young roster, truly grasped what it takes to be successful when the Stanley Cup is on the line. So much so that on Pardon the Interruption Monday, Tony Kornheiser and Michael Wilbon, two hockey experts in their own minds, openly compared Alex Ovechkin and the Caps to Tracy McGrady and the perennial underachieving Houston Rockets, who are simply unable to advance past round one of the playoffs.

Well, we doubt either Kornheiser or Wilbon actually tuned in last night, but if they did they saw the Capitals’ most inspired effort in recent memory. Backed by Varlamov’s 33-save effort and a three-point night from the enigma that is Alexander Semin, the Caps cruised to an easy victory in front of a sellout crowd in New York.

It seems that before they even arrived at the rink the Caps were in a feisty mood Monday. Ovechkin decided to play some head games with the Rangers and swung by to watch their morning practice (until he was asked to leave). Capitals coach Bruce Boudreau got in on the fun when he had his guys skate in one set of lines during pregame warm-ups and then switched everything around at the last minute to keep his opponent guessing.

Whatever they did worked to perfection, as the Caps came out with more intensity, grit and determination than the Rangers. Of course, sitting center Michael Nylander in favor of forward Donald Brashear never hurts a team looking to send a message, but we digress.

The Caps hustled, checked and played sound hockey from the opening faceoff. Semin had two point-blank quality scoring chances early and failed to convert either. But instead of getting rattled, the Capitals dug in even more and Semin ended up scoring two first-period goals anyway – both with a higher degree of difficulty than the two early “gimmies” he whiffed on.

After taking a 1-0 lead on Semin’s first goal of the night, the Caps got a huge break when Rangers forward Ryan Callahan missed a wide-open net in one of the rare moments when Varlamov looked human. Instead of “putting the biscuit in the basket,” Callahan’s shot rang off the post. Next thing you know the Capitals are breaking out the other way and Semin picked up his second goal of the night with just over eight minutes left in the second frame. Most importantly, both goals were scored during five-on-five play.

“It’s the luck of hockey and the luck of sport,” Boudreau told the media after the game. “Some guy hits a post on a great opportunity and you go down the other end and score. And instead of 1-1 you’ve got 2-0, and you’re team is going in after the first period with a lot of confidence.”

Forward Brooks Laich and defenseman Tom Poti each added powerplay goals as the Capitals solved Rangers goalie Henrik Lundqvuist, for one night at least. The three stars of the game were, in order, Varlamov, Semin and defenseman John Erskine.

Let’s start with Varlamov, who posted the first shutout of his professional career. Through eight NHL games (including both the regular and postseason), Varlamov has gone 5-1-1 with a 1.75 goals against average and an astounding .935 save percentage. In two playoff games, Varlamov has stopped 56 of 57 shots he’s faced for an unheard of .982 save percentage. That, my friends, is called getting it done.

Semin, along with Ovechkin and center Nicklas Backstrom, provided all the necessary offense Monday night. He finished with two goals and an assist and the “young guns” line of Semin-Ovechkin-Backstrom picked up eight points (two goals and six assists).

The final player whose effort needs to be highlighted is Erskine, who we lovingly refer to as “Dumb & Dumber” because of a resemblance to Jeff Daniels’ Harry Dunne character. Erskine, who may be the most unheralded player on the current roster, was magnificent Monday night. If nothing else, he flipped the script and beat Ranger agitator Sean Avery at his own game.

Avery makes a living by getting under his opponent’s skin and making them focus on everything but the game at hand. For one night, Erskine “out Avery-ed” Avery, who was so flustered throughout the game that while he was on the ice for a total of 16 minutes and 28 seconds, he managed to rack up 18 minutes in penalties – four minor infractions and a 10-minute misconduct. Not only did he take bad penalties, but he did so in the final two periods while the rest of the Rangers were playing catch up. He wasn’t the only reason the Rangers lost the game, but he certainly didn’t help their cause.

If this is the Capitals team that shows up again Wednesday night then Caps fans should feel confident that maybe – just maybe – this team is finally ready to walk down that aisle.