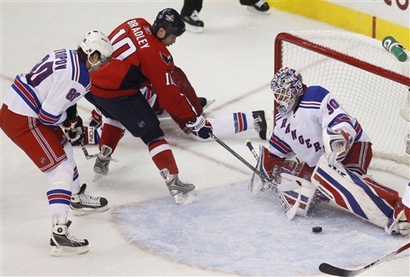 There was a time, way back in the regular season, when the Washington Capitals would jump out to an early lead and then cruise to an easy victory. There was also a time when the Capitals were simply unbeatable at the Verizon Center.

Well, those days are gone.

Through two games the Capitals have outshot the New York Rangers 27 to 10 in the first period, and yet, have been outscored 1-0. In all, the Caps have outshot New York 70 to 45, but have been outscored 5-3 and have held a lead for just 1:09 total this series. That sobering statistic bears repeating – Washington has had a lead for just one minute and nine seconds through two games.

So what’s the problem? For starters, they have fallen back into an all-too-familiar rut of settling for long-range (i.e. – low percentage) shots. The Caps have fired an astounding 160 shots through the first two games. But not all shots are good shots. Of those, 70 have actually found their way on net. Rangers defenders have blocked 50 shots and the other 40 shots have simply been off target.

“A lot of our shots were coming from the outside, but rebounds were coming to spots where we should be, we just weren’t there to see it,” said Capitals defenseman Mike Green.

This should be fairly obvious at this point, but Rangers goalie Henrik Lundqvist is too good to beat with fluke goals. If you don’t create traffic in front of him and attempt to screen Lundqvist, you’re not scoring. By placing a forward at the top of the goalie crease, you give yourself a chance of a deflection, rebound or Lundqvist simply not seeing the initial shot. Forward Brooks Laich does this. Unfortunately, he’s about it.

Regardless of who is in net for New York, the Capitals, as a team, need to roll up their sleeves and get dirty. Forwards need to be more aggressive in the offensive zone (and not in the “Alexander Semin takes an ill-advised retaliation penalty” kind of way).

Fifty blocked shots says the Caps’ offense also needs to be less predictable. An extra head fake or deke move might freeze the Rangers’ defense long enough to get a better shot.

Even Capitals coach Bruce Boudreau, who has done a masterful job at pushing all the right buttons during his two years in D.C. sounded agitated when asked about all of the Rangers’ blocked shots.

“Their defense is doing a helluva job, blocking us out,” he said. “We talk about getting to the net and going for rebounds. It’s not like we’re sitting there saying we’re going to take the shots on the side.”

The Capitals also need to understand this is still a team game. Green and Alex Ovechkin combined for 87 goals in the regular season, but have yet to recapture their magic. Both were pressing too much during game two and at times seemed to try and single-handedly win the game Saturday. Not coincidentally, they combined for zero goals and something like 16 turnovers.

Whether you’re the best player in the league or a minor-league call up the game remains the same. Take what your opponent gives you and work with your teammates. Create traffic. Don’t force high-risk passes. Remember that it’s still legal to score a goal during five-on-five situations.

None of this is “rocket surgery,” as Joe Theismann would say, but it all bears repeating as the Capitals find themselves on the brink of elimination after one of the most promising regular seasons in franchise history.