mighty casey at the bat 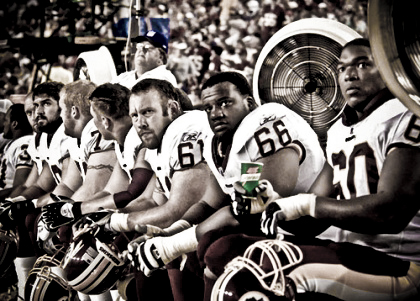 There’s nothing glamorous about the lifestyle of an offensive lineman. While quarterbacks bask in the spotlight, a good chunk of any team’s fanbase is incapable of even naming all five starting offensive linemen. But that’s okay. Guys like Washington Redskins center Casey Rabach don’t mind it at all. We caught up with Rabach over the weekend to see what he’s been up to since last season ended.

So Casey, did you do anything special with your offseason?

“Actually, we just built a new house and had most of our time taken up by moving in and finalizing all that stuff,” Rabach said. “We were pretty busy.”

“Back in Wisconsin,” he said.

So you spent most of your time back home?

“We try to stay back there as much as we can,” Rabach said. “Any time we get a break from football we’re back there. My daughter is in preschool now, so we try to keep her in that here too. It’s a lot of jumping back and forth.”

You get to do any ice fishing or anything fun like that?

“Yeah, I took the kids a couple times and did a little snowmobiling with them too,” he said. “Mainly I just tried to hang out with the family, with the kids and stuff.”

Does it feel odd not having all the weekly aches and pains you have to suffer through during the NFL season?

“It doesn’t seem weird, it seems nice not having all of that going on,” Rabach said. “Some days are worse than others obviously during the season. Some times you feel great and other times … not so much. I’m just preparing my body to take that beating again next fall.”

Mentally are you back into the swing of things now with the offseason workouts and the draft right around the corner?

“Yeah, definitely,” he said. “I think we’ve been back at it for two weeks now, so it hasn’t been that long, but the first week is always the toughest one as you start working on someone else’s schedule instead of working on your own. It’s just habit now. After nine years it comes pretty easy now to get back into the swing of things because you’re doing the same thing year after year.”

You’ve been with the Redskins long enough now that these active offseasons shouldn’t surprise you anymore, so let us ask – what was your reaction when the team signed defensive tackle Albert Haynesworth?

“I like it a lot that I don’t have to line up against him on Sundays, but at camp and work during the week my job obviously got a lot tougher,” Rabach said. “I think he’s a good signing for us. He was the top free agent in this year’s class and a guy that year after year has proven to be a dominant player in the league. Those are always good players to have on your team, you know. Obviously the money surprised everybody, what he signed for. But Mr. Snyder likes to spend some money in the offseason, so for him to come here wasn’t a huge surprise.”

If memory serves us, you’ve played against him before. What’s it like to line up against “Fat Albert?”

“He’s good, there’s no doubt” he said. “He wasn’t your typical defensive lineman, in Tennessee at least, where he kept to a gap and maintained his gap and let others make plays. He made it seem like he was trying to make plays no matter where it was and gap integrity was kind of a second thought. He’s a guy who, for as big as he is, is a pretty good athlete and has got a motor on him.”

The Redskins defense in recent years has been very good in many areas, but getting turnovers hasn’t really been one of them. What did you think about the team’s decision to re-sign cornerback DeAngelo Hall?

“I think that’s one of the main reasons why they ended up signing him was because of that,” Rabach said. “His time here last season was kind of like an interview process almost to see what he’s all about after Atlanta and Oakland. He proved to be very good in man-to-man coverage and obviously got very lucky being able to sign a contract like that in back-to-back years, but good for him.”

Out of all of the acquisitions, we’re willing to guess you were happiest about the return of guard Derrick Dockery. What’d you think of that move?

“You know what, I love Dock,” he said. “He’s a good guy. He’s a good football player, but he’s a really good guy. He’s a guy that works hard, he’s really humble, but he works his tail off. He got paid when he went to Buffalo but he was still humble, soft spoken and willing to get goofed on and all that stuff. It’s really comfortable having him back on the left side.”

He was a guy you didn’t want to lose, but no one could fault him for taking that ridiculous payday from Buffalo, right?

“Yeah, exactly,” Rabach said. “You can’t get mad at a guy leaving for that kind of money, that’s for sure. Obviously we didn’t want him to leave because he was part of our line and everything, but when you get a shot at money like that you’ve got to go.”

You guys started the season 6-2 and everything seemed right in the world. But as we all know, things unraveled in the second half and the team stumbled to 2-6 down the stretch. Having had some time to sit down and think about everything, what the hell happened?

“I would say injuries and we just ran out of steam,” he said. “I think guys got tired and the injury bug bit us a little bit here and there and we just did not play up to our potential like we did those first eight games of the season. When we weren’t playing our best football we were losing to teams like Cincinnati, St. Louis and San Francisco, which were surprise losses. When you don’t play, that’s what happens.”

One of the things running back Ladell Betts said to us last week was that maybe your confidence took a little hit as well. When things weren’t going well in the first half of the season, you guys were able to adjust and keep on rolling, but in the second half if something went wrong it was almost like “here we go again.” Do you think that’s accurate?

“I think that’s accurate, definitely,” Rabach said. “Clinton [Portis] got nicked up a little bit, so we decided to rely on the passing game a little bit more. Also, the offensive line got banged up a little and the running game struggled. Did we start second guessing everything? Yeah, I’m sure there was a lot of that going on. As players we just need to go out week after week no matter who is lining up beside you and just play football. I think that got away from us in the second half of the season.”

You mentioned the passing game, so let us ask you – do you think Jason Campbell is definitely the guy who can and ultimately will take this team to where we all want to see it go?

“Yeah, definitely,” he said. “Last year was Jason’s first full season as a starter. You could see, especially in the first half of the season, he was taking more of a leadership role. He was a lot more confident, not only in himself, but in the players around him. This being his second year in this offensive system, I think will pay huge dividends for him. He’s been in a lot of different systems just with Washington and having two years to work with [Jim] Zorn coaching him in this system, I think he’s going to grow by leaps and bounds this year.”

We don’t think the average fan realizes just how important continuity is. Having the same system year in and year out and not having to learn a whole new offense every other year provides a quarterback with a huge advantage, right?

“Everybody says quarterback is the hardest position on the football field,” Rabach said. “He gets a lot of glory when we’re playing good and takes a lot of blame when we’re not doing so good. Right or wrong, that’s how it happens. It’s tough for a guy to not only learn a new system but to also be coached a completely different way whether we’re talking about Coach Zorn or Billy Lazor or Al Saunders, who are all totally different. You have to adjust to that and there’s a lot of pressure. People don’t really understand what goes into that, but like I said, I expect big things from Jason this year.”

The other hot topic this offseason is the offensive line. Since you’re a part of it we wanted to ask for your thoughts when you hear critics say the line needs to be blown up and completely overhauled.

“It gets pretty comical at times because those same people loved us when the offense was doing fine last year,” he said. “But if one of us has a bad game they jump all over us and end up contradicting themselves. Any time you struggle or have a poor rushing effort we obviously take it to heart and we blame ourselves first and foremost. I think another year in Coach Zorn’s system will be huge for us as well.

“We were in Coach [Joe] Gibbs’ system where we’d just go out and manhandle guys week in and week out as he kept calling for runs because he really understood where our best assets were,” Rabach continued. “I think last year Coach Zorn was still learning where our best strengths and biggest weaknesses were. This year it will show how far he’s come just by how he calls our offense and how he dictates our play. It’ll show that he understands us more and that we’re all a lot more comfortable in this system. Can we use more depth? We can always use more depth. There’s injuries in this league all the time and it’s rare when an offensive line that starts the first week is able to start all 16 games. I know there’s a huge right tackle controversy this offseason with Jon Jansen and Stephon Heyer. It’s going to be interesting to see what they do as far as the draft or anything else with free agency before we get started with the season. Can Jon still do it? Can Stephon do it? I think we’ll get those answers pretty quickly once we get going.”

We know football is a business, but Jansen is also a good friend of yours. How’s he taking all of this?

“He’s working hard, he really is,” Rabach said. “He is a really good friend, but I do understand this is a business and no matter what happens I wouldn’t talk bad about someone on the team – good, bad or indifferent. We need better play out of the right side of our line as a whole this season and that’s what we all expect.”

One final question – what can we expect from the Redskins offense this year?