finishing up with betts 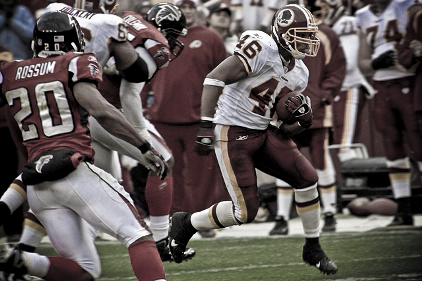 Yesterday we ran part one of our exclusive interview with Washington Redskins running back Ladell Betts in which he talked about how he’s spent his offseason and his plans for life after football. Here is part two where we chatted about the team’s free agent acquisitions, how Betts views himself and those pesky quarterback rumors swirling around town these days. Enjoy.

The team was also able to bring back cornerback DeAngelo Hall. What are your thoughts on having him around for a few more years?

“You know, that one didn’t surprise me as much,” Betts said. “I kind of had a feeling that we would try to keep DeAngelo, especially after the way he played once he got here. I mean, I don’t know what happened, as far as when he got out in Oakland, that’s not really for me to dig into. But I think he was a pleasant surprise when he got out here. He meshed well with the team, everybody got along well with him and he immediately created turnovers. That’s something that the defensive coaches and the head coaches were looking for, so it wasn’t a surprise to me that we would try to keep him – especially with him being so young.”

Even Randy Moss didn’t look like Randy Moss when he was in Oakland, so we’re not going overboard trying to analyze Hall’s time with the Raiders.

“Everybody has things like that that happen,” he said. “And sometimes things happen for a reason. He’s a hometown guy anyway, so like I said, it didn’t surprise me that we kept him.”

The other guy the ‘Skins brought back was offensive lineman Derrick Dockery, who you obviously know well. What’s it like to see him return to town?

“I tell you what, that was probably one of the guys I was most glad to see come back,” Betts said. “I was sad to see him go in the first place. Being a running back, he was one of the guys who always paved the holes and he helped me – or I guess we helped each other – to get new contracts back in 2006. It was good to see Big Dock make his way back to the city and just from talking to him since he got back, I think he missed being here.”

We’ve talked to some of your teammates recently and tried to figure it out, but no one really has a good answer. What the hell happened to you guys to make you finish the season 2-6?

“I think it’s a series of things,” Betts said. “There’s really no excuse for it, but we had injuries take place. I really think that was the biggest thing, injuries caught up with us and we just weren’t playing with the same level of confidence. I think once you drop a few games here and there, you get into tough ballgames and people sometimes tend to look at it and say, ‘Oh no, here we go again’ as opposed to the first eight games if something happened nobody even blinked. We kept fighting through and pushed through to get those close games. In the end it didn’t work out that way. We got banged up a little bit, but that happens to every team. We just didn’t finish the same way we started. There ain’t no excuse for it, it’s just something that happened.”

We talked earlier about your decision a couple years back to re-sign here and stay in Washington. Do you see yourself as a guy who could go to another city and be the feature back or are you more comfortable here backing up someone like Clinton Portis?

“I think I definitely have the capabilities to go somewhere else and be the guy if I needed to,” he said. “But at the time, I wanted to come back here basically because I’ve always enjoyed this city and I’ve always enjoyed the fans and playing for this franchise. Clinton and I have never had a problem getting along and I’ve always envisioned myself being a part of the offense if I did come back, which it did and didn’t work out. I think last year it was beginning to manifest itself, as far as me being a part of the offense again up until I got hurt. I was playing quite a bit until I got hurt and then it was all down hill as I was trying to get back and trying to fight through the pain. I wasn’t the same player when I came back.”

We’ve told you before we really like the idea of utilizing you and Clinton in the backfield at the same time to keep defenses on their heels. Any chance we’ll see more of that this year?

“You never know,” Betts said. “I haven’t talked to Coach Zorn about that yet, so I don’t know what they have in the works. I think that’s definitely a possibility because when we were both healthy they tried to sprinkle it in at the beginning of the season. It even got to the point where they were giving me series of my own, a couple series a game. It was working out well for me up until I got hurt. I had a good average going, I was catching balls and was running the ball well. Unfortunately I had the injury about midway through.”

The hot topic these days is Broncos quarterback Jay Cutler, with fans jumping up and down begging their respective teams to make a play for him. So let us ask you, do you believe Jason Campbell is the real deal? Can he get this franchise to where we all want it to be?

“I think so,” he said. “I think he showed it during the string of the first eight games with us going 6-2. Jason played lights out. They were doing features on him, talking about him on SportsCenter about how he wasn’t turning the ball over and whatnot. He’s shown the capabilities, but along with the rest of the team, we just didn’t play at the same level in the second half. I think if he can pick that up where he left off, as far as the first half of the season and bring that into this year, he’ll play solid football. He’s our quarterback and I think D.C. will be proud of him.”

So you’re saying we don’t need Cutler or any of those other names out there?

[Editor’s note: Dear Redskins front office, please read Betts’ last answer over and over until it sinks in. Just because a guy like Jason Taylor excelled in one town in one system does not mean he automatically will play at a Pro Bowl level in Washington. Please write this down or at least refer to Ladell before mortgaging away future draft picks and cap space. Thanks.]