catching up with betts 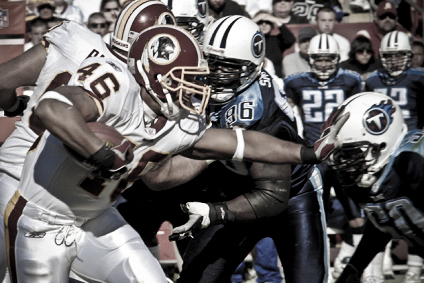 Washington Redskins running back Ladell Betts is not your stereotypical NFL player. While most fans might think of football players as nothing more than flashy young millionaires “making it rain” at their choice of gentlemen’s club, Betts is busy setting himself up for success after he hangs up the cleats. We caught up with the eighth-year pro to see what he’s been up to and were surprised with his answers. Here’s part one of our interview.

How was your summer vacation? Did you do anything exciting during your time off?

“Nah, I didn’t do anything too exciting,” he said. “I went down to Puerto Vallarta for a little bit, but other than that I just kind of kicked back and relaxed. I went up to Wharton too, for the Business Management and Entrepreneurship Program.”

Is that an NFL program?

“Yeah, the NFL puts it on,” Betts said. “They have them at different schools. They have one at Stanford, one at Northwestern University and one at Harvard, and I did the one at Wharton.”

Tell us a little bit about that. If we remember correctly, Renaldo Wynn and some other Redskins players have participated in that program in the past.

“Well, they teach you about different business management opportunities,” he said. “The one I did at Wharton has a heavy emphasis on real estate. It’s like a crash course, basically. You go there for four days from like eight in the morning until like seven at night and then you go back for more later, which I’m about to go back and do in a week or so. They teach you about the do’s and don’ts – what to look for and what to be leery of. How to approach things, how to read financial statements and everything. It’s a good course.”

You hear horror stories about folks making one bad business decision and getting taken for all their money, so it’s cool that the NFL is trying to set you guys up for better success, right?

“Yeah, that’s basically what they’re doing,” Betts said. “It’s a good idea and I’m glad I went. I was a little hesitant about going because I’ve never been fond of school, but I’m glad I went. It’s been pretty fun to go.”

Do you call Virginia home these days? Do you stay in the area during the offseason?

“I do. I do,” he said. “I’ve been living here since I got in the NFL. I bought my house my second year in the league and this has pretty much been home for me ever since.”

We know you had the chance to explore free agency a couple years ago and decided to stay here, but it’s nice to know you consider this area home now.

“I think the D.C. market, just as far as the people and the opportunities, as far as business and stuff away from football – life after football – I think D.C. is one of the hardest markets to walk away from,” Betts said. “There’s not very many places in the United States that have this kind of diversity and business opportunities. There’s so many different people you can network with and I just think it’s a good opportunity for me.”

We hate to state the obvious here, but you know you’re still young, right? You’re only 29 and you’re already sitting here planning life after football.

“I am young, but the thing about football is I think too many guys don’t approach it that way and then the next thing you know your name isn’t on the back of that jersey anymore and now you’re out in the real world and you haven’t made any contacts and you haven’t really tried to establish yourself outside of football,” he said. “For most of us, we’ve been doing this since pee wee league through elementary or junior high or whatever. We don’t know much else other than football. At some point in time you’ve got to branch out and try to make that transition smoother, and that’s all I’m trying to do. I’m not trying to retire from football, I’m just trying to make it so when that day does come I’m not out in the dark wondering what I’m going to do now.”

That brings up an interesting question – what would you be doing with your life if you never made it to the NFL?

“Honestly, I don’t know,” Betts said. “That’s a tough question to ask because, for me, football has always been there. I think from every step of the way since high school … you know, for most of us, if you’re a stand out player in high school you probably envisioned yourself going to college and being a stand out football player. When that happens, you just automatically jump to thinking about the NFL. I never really envisioned myself doing anything other than playing football, so I think that’s why over the last couple years I’ve tried to wrap my mind around what I’m going to do after football. That’s what I pretty much have tried to focus on in the offseason.”

Other than a quick trip to Mexico and some business classes you haven’t done anything exciting with your time off?

Who from the team do you keep in touch with during the offseason?

“Not too many guys,” Betts said. “I keep in touch with Rock [Cartwright], but I think that’s probably about it. It’s not really by design or anything, but I think once you get to the NFL and you’re like me going into your eighth season, most of the guys I came in with or are my age, they’ve got lives of their own. Most guys have families – you know, wives, kids and all – or live other places, so they all go off and do their own thing. Rock just happens to be one of the guys I’ve been pretty close with since I’ve been here and I keep in touch with, but other than that, I think most of the guys just go their own way.”

Like you said, you’ve been here a while. Does anything surprise you anymore when it comes to the Redskins and their free agency habits?

(Laughs). “I was surprised that we did get [Albert] Haynesworth,” he said. “Word on the street was that the asking price was going to be pretty large, so I didn’t know if we were in the market for that kind of player, but it’s a pleasant surprise. I’m glad we did. I’m fortunate enough to be able to turn on the TV on Sundays after our games and see the damage he did to other teams. Hopefully he can bring that intensity out here.”

Obviously he’s a game changer, but what does Albert Haynesworth bring to the table?

“First of all, he’s going to take up blocks,” Betts said. “That’s not a guy you’re going to take out one-on-one. He’s going to draw double teams and teams are literally going to have to gameplan for him because of his size, his stature and his level of play. He’ll be able to create matchup problems for other guys and hopefully free up some other guys off the edge and free up some linebackers. At the same time, he can do his damage as well, as far as making a push up the middle and not allow quarterbacks to step up. He’ll just crash that pocket and wreak havoc in the trenches.”

So wait, you’re telling me Ladell Betts can’t just drop his shoulder and level a guy like Albert Haynesworth?

(Laughs). “You know, of course, I like to think I can, but now I don’t have to worry about doing it,” he said.

Check back with us tomorrow for part two of our interview with Ladell Betts.