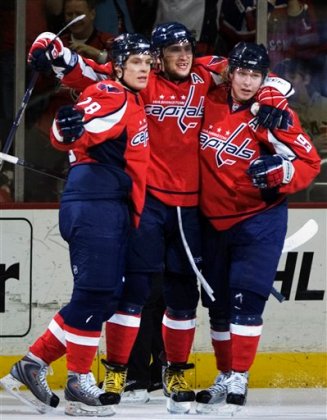 Washington Capitals wing Alexander Semin continued his superb play over the weekend by extending his personal-best scoring streak to nine games with one goal and three assists in the Caps’ 5-4 shootout victory over the Carolina Hurricanes Saturday night.

Not only did Semin have a hand in all four of the team’s goals during regulation, but he also beat Hurricanes goalie Cam Ward in the shootout to help secure the win.

Just as important though as Semin’s recent offensive contributions is the fact that the talented forward has, for the most part, stayed out of the penalty box. Even though the Capitals get whistled for far too many minor infractions, Semin has served just six minutes in the penalty box over the last nine games.

For the year, Semin now has 29 goals and 40 assists for 69 points. While he’s got 67 penalty minutes on the year, Semin does rank in the NHL’s top 10 for plus/minus with an impressive plus 26. And we don’t think many people realize this, but Semin has recorded at least one point in 43 out of the 51 games he’s played in this season. That shows a level of consistency in his play that Caps fans might otherwise miss.

Semin is an aggressive player with a lethal wristshot and even though he’s been around a while, he’s still only 25. And when it comes to young players, it’s best to never get too high or too low. It’s why Washington Redskins defensive coordinator Greg Blache suggests fans fall in love with strippers rather than rookies. Less heartbreak involved, or so he says.

Remember, all of this “consistency” is coming from a guy who earlier this season was doing his best to get in management’s permanent doghouse for what was termed “lazy penalties.” So what changed? Honestly, no one knows for sure.

Although he understands more English than he lets on, Semin prefers to keep a distance from the media and gladly uses the language barrier to do so. But seriously, why should anyone care if the guy likes talking to the press or not? As long as he stays out of the penalty box and keeps producing at his current more-than-a-point-per-game pace, Semin can do whatever the hell he wants.