In with the new 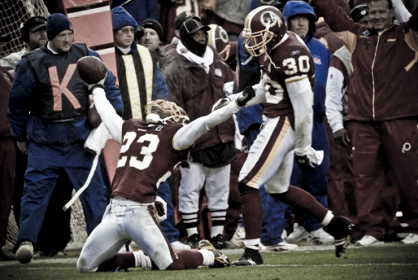 So far this week, we’ve taken a look the Albert Haynesworth signing and the releases of both cornerback Shawn Springs and defensive end Jason Taylor. In our third and final installment, we’ll focus on two familiar names the Washington Redskins brought back into the fold.

In 2008, cornerback DeAngelo Hall signed a seven-year, $68-million deal with the Oakland Raiders. Things didn’t go very well in Oakland and when the dysfunctional franchise opted to clean house, they started with the newest players on the roster – including the former Virginia Tech standout. The Raiders thanked Hall for signing with them and explained that the move wasn’t personal. Owner AL Davis had just decided to take the team in a different direction. But honestly, why should Hall have cared? He got a cool $8 million for just eight games in the silver and black.

Once a free agent, Hall was sought after by well-respected organizations such as the New England Patriots, the Pittsburgh Steelers and others. He ultimately chose the Redskins because they were the team he grew up rooting for and playing for them would move him closer to his hometown of Chesapeake, Virginia. The ‘Skins, in what was the steal of the year, signed Hall for the remainder of the season for just $492,000.

When Hall arrived in town he came with potential baggage. In Atlanta there had been questions about his character and rumors of a “me-first” attitude. In Oakland, Hall seemed to get burnt every time a quarterback threw the ball his way. But as everyone knows by now, Hall was on his best behavior off the field and one of the Redskins’ best defenders on it.

In the first quarter of his first game with the Redskins, Hall jumped on a pass by Dallas quarterback Tony Romo that was intended for wide out Terrell Owens. If you want to win over ‘Skins fans, that’s a good start. Although he played in just eight games for Washington, Hall finished second on the team in interceptions and was the only consistent playmaker on the Redskins defense the second half of the season.

Back in early December, we asked Hall how he seemingly overnight transformed from a guy who “experts” thought was toast during his time in Oakland to a bona-fide playmaker in D.C.

“My hat just goes off to the scheme,” he said. “It gives me a chance to see the ball. That was one of the biggest things I didn’t like about Oakland. I’m a guy who likes to try and see the ball and try to make a play for the ball. I feel like I got pretty good hands. I played a little bit of receiver too, so any times I can get my hands on the ball I try to catch it. I’ve just been put in good positions. We’ve made good calls on those plays and I was able to make a play.”

Basically, Hall failed in Oakland for the same reason the Jason Taylor experiment didn’t work out here. The organization, for whatever reason, declined to utilize the Pro Bowl player in a way that maximized his abilities. It wasn’t Taylor’s fault he was a bad fit for Greg Blache’s defense, and it wasn’t Hall’s fault that he’s better suited playing in a different defensive scheme than what they ran in Oakland.

By all accounts, Hall is a perfect fit for the Redskins – both on and off the field.

The other move the team made at the start of free agency involved the return of guard Derrick Dockery, who was a third-round pick by the ‘Skins back in 2003. After four solid years as one of Joe Bugel’s Dirtbags, Dockery departed via free agency when the secretly-inept Buffalo Bills blew him away with a seven-year, $49 million deal. At the time we openly asked for an explanation as to how the Bills came to the decision to offer that much money to the Redskins’ third or fourth best offensive lineman and wondered what they would have paid someone like tackle Chris Samuels.

Dockery was solid and dependable on the field, but was never spectacular. In his early years he was viewed as a big body with raw talent. He’d make a good play, but then follow it up with a head scratcher. Anyone who followed the ‘Skins in his early days knew Dockery was good for one false start or holding penalty a game. Sure, his game improved as he matured, but we seriously doubt anyone outside of the Dockery family ever sat down just to watch Derrick play.

So when the Bills offered a ridiculous amount of cash to bring Dockery to Buffalo, the team wished him farewell and acquired veteran offensive lineman Pete Kendall from the New York Jets. Kendall was more reliable than Dockery, but he’s also seven years older. By 2008, Kendall’s arthritic knees were so bad that he sat out Wednesday practices just so he could be ready to go on Sundays. Kendall is a true professional and will always give 100 percent on gamedays, but he’ll be 36 when the season starts and the Redskins have made it a priority to revamp their offensive line this offseason.

When the Bills screwed up a simple trade that would have shipped Dockery to Detroit because they failed to turn in the necessary paperwork in time and would have had to eat a $4 million roster bonus, they decided they’d rather release him than pay him and then trade him. Seeing an opportunity to bring back a well-respected player who is also a good locker room guy, the ‘Skins jumped at the chance to bring back Dockery – giving him a five-year, $27 million deal.

Both the Hall and Dockery signings are solid moves because they’re both young – Hall is 25, Dockery is 28 – and both are known commodities. There’s no doubt that Hall and Dockery work in Washington because we’ve seen it. And as an added bonus, there’s even talk of bringing back Kendall to add depth to the offensive line should he not get a better offer on the free agent market. If the team is going to spend big money each year when free agency kicks off, these are the types of players we can only hope they target.

So while we’ve been critical of the ‘Skins front office in the past, there’s nothing negative to say about either of these moves. Here’s hoping this is a sign of a new philosophy at Redskins Park. Gone are the days of fantasy football. Instead, the team will continue to be aggressive in pursuing the players they desire, but this time around they’ll have a better idea that those players actually work with what the team is trying to do.

It’s not rocket surgery, as Joe Theismann would say, but it’s a start.