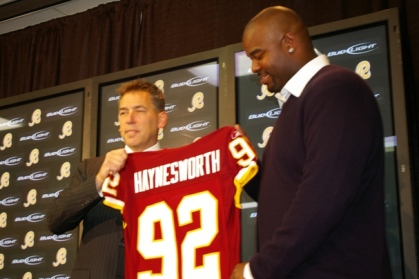 From all of us at Homer McFanboy to all of you in Redskins Nation we have just one word of advice – please proceed with caution.

You would think that everyone involved in this dance would be familiar by now, but that doesn’t seem to be the case. For those who need it, here’s a quick refresher on how things typically play out around here this time of year:

During the Daniel Snyder era the Washington Redskins have always been active in identifying which players they want and aggressively pursuing them. Sometimes that means chartering up the private jet and wooing free agents off their feet with fancy dinners and courtside seats for the once-relevant Wizards. Other times that means sacrificing draft picks in trades to acquire the objects of their desires. Today though, we’ll stick with free agency.

Since the Redskins have hovered around .500 during the Snyder era, players aren’t exactly lining up to play in Washington. That means, more times than not, the ‘Skins front office has to break the bank and overpay to get name players to come to town.

This year, defensive end Albert Haynesworth was the prom queen. He batted his eyes, flashed a smile at Vinny Cerrato and was rewarded with a seven-year, $100-million contract. Even if Haynesworth is a complete bust, he’s still pocketing a record-setting $41 million guaranteed. But don’t hate the player, hate the game the Redskins play.

There are two schools of thought on Haynesworth. The first says that at 27-years-old, Haynesworth is one of the most dominant defensive players in the NFL. He’s a defensive tackle who can take on double and triple teams which frees up teammates to make plays. What’s more, he’s not just a fat body who clogs up the middle – he’s also a playmaker. Haynesworth has more sacks in the last two seasons (14.5) than any other defensive tackle in football. Adding an All-Pro talent to a Redskins defense that at times seems completely unable to get a sack or create turnovers would seem like a no brainer. But in the interest of fairness, let’s look at the other side.

The Redskins rarely develop their own talent. They seemingly prefer to let other teams draft young (i.e. – cheap and affordable) players and spend the time helping those players begin to realize their talent. Once those players become established NFL players and more importantly, are eligible for free agency, the ‘Skins swoop in and hand over a blank check. In an ironic twist, the Redskins even sometimes opt to trade away draft picks for players who fit this mold (see Lloyd, Brandon), which is great fun for everyone because it keeps the vicious circle intact.

While the Redskins are in the mushy phase of the relationship, others seem to already be looking to some of the possible flaws with young mister Haynesworth. They point out that he’s played in all 16 games just once during his seven-year career. Those same critics wonder aloud what Haynesworth’s motivation will be now that the Redskins have made him “Oprah rich.” Plus, there’s that messy story about curbstomping an opponent’s head after losing his damn mind during a game a couple years back. Even if it happened to a Dallas Cowboy, that’s not the type of player you want to be a role model in your local community.

For what it’s worth, Haynesworth seems to understand that with great contracts come great responsibilities.

“You’re not going to remember Albert Haynesworth as a bust or the guy who had the Dallas incident or anything. You will remember him as a great player and that’s what I live for,” Haynesworth said during his press conference Friday. “You know, the money’s awesome. It’s great. But I’m out here, when I line up in front of somebody, when I put the helmet on, it’s to kick butt and it’s to make sure that guy knows that I’m the best player to play against.”

The addition of Haynesworth gives the Redskins one of the scariest defenses in the league … on paper. While it ensures that ‘Skins fans will pick up this year’s Madden video game, it doesn’t automatically ensure anything in … you know … actual games. There’s a reason some sites sell Redskins-inspired “Offseason Champs” t-shirts. It’s the same reason talking heads love to roll out the tired list of Jeff George, Deion Sanders and Bruce Smith. Building a team around free agency rarely works. Most teams get it, but the Redskins front office seems convinced they can make it work.

So feel free to talk yourself into this latest free agent acquisition or even talk smack to rival fans if you see fit. As for us, we’ll be proceeding with nothing more than cautious optimism until we see just how it all comes together on the field.