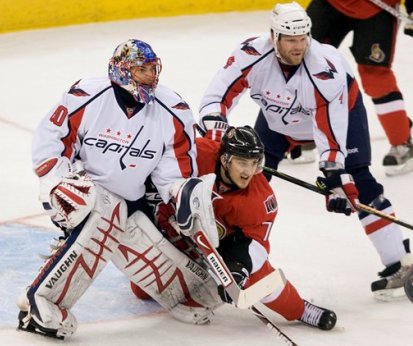 Last week, we focused on the good, the bad and the uncertain for the Washington Capitals so far this season.

One area we didn’t really cover in any of the three midseason reviews was goaltending, mainly because depending on which game you’re watching, the Caps netminders can fall in any of the three categories. Or at least that’s how it was for the first month or so of the season.

Looking at the statistics, goalie Jose Theodore has staked his claim as the team’s number-one goalie, posting a 17-9-1 record at the All-Star break. But keeping with the theme of good, bad and uncertain, he’s been far from the league’s elite.

While his 17 wins rank 11th best in the NHL, Theodore’s 2.81 goals against average is 27th best and his .898 save percentage ranks a disappointing 38th overall.

As a point for comparison, Theodore was just 8-6-1 with a 3.00 goals against average and a .883 save percentage in his first 18 games for Washington.

Our take on the goaltending situation, specifically with Theodore, is that the more he’s played, the better he’s done. Early in the year when coach Bruce Boudreau was inclined to “play the hot hand,” Theodore struggled. But with backup Brent Johnson dealing with some minor injuries, Theodore has seen the bulk of the action and he’s become much more dependable of late.

If he has an off night, Theodore has shown that it’s best to get him back in the net the next night to move past the rough outing. Otherwise, if he’s stuck on the bench for two or three games, he’s shown a propensity to struggle while attempting to get into any kind of rhythm. While it’s hardly Earth shattering to learn a goalie does better when he’s getting consistent action, Theodore seems to be one of the streakier goalies in the NHL. Guessing which Theo we’ll see on any given night is half the fun.

There are a couple positives we should point out about Theodore. Thanks to the Caps’ 5-4 win over the New York Islanders Jan. 19, Theodore became the 11th active goaltender with 200 career wins. Any goalie who can win 200 games in the NHL is obviously pretty good.

And what’s more than pretty good is Theodore’s career record of 11-3 in shootouts. He may only have a 19-26 record in the playoffs, but Theodore is downright clutch in shootouts. With any luck, the Capitals can continue their hot play down the stretch and then start focusing on getting Theodore a few more postseason victories.