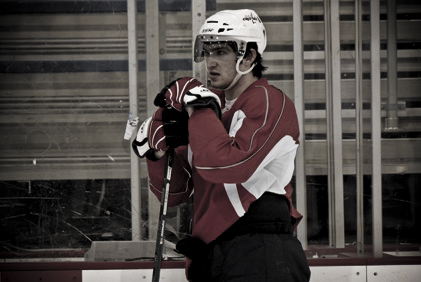 Yesterday we addressed the many positives of the 2008-09 Washington Capitals. Today, we’ll focus on some of the areas that should be of concern to Bruce Boudreau and the coaching staff.

The Capitals are currently 30-15-3, which is good enough for fourth best in the league. But what’s troubling is that eight losses have come against teams who wouldn’t qualify if the playoffs started today. Teams like the Ottawa Senators and the Columbus Blue Jackets who aren’t going anywhere this season have multiple victories over the Caps this season (with Columbus shutting out Washington twice).

It’s great that the Caps can compete with the league’s elite teams like the Boston Bruins, Montreal Canadiens and New York Rangers, but until they can get the same level of intensity and effort night in and night out, this team is setting itself up for failure down the road. Beating Boston twice only to turn around and lose twice to Ottawa doesn’t help your cause. It shows that some folks in that locker room think they can just show up and the league’s doormats will automatically roll over. But that’s not the way it works.

If anything, lesser teams look at the schedule and circle matchups against teams like Washington. They might not have a great record, but if a squad like Columbus can show they can not only compete with, but defeat the mighty Capitals, it can help get them back on track. Every team has talent. Underestimating any opponent is naïve and foolish.

In addition to playing down to the level of their opponents, the Caps also have a tendency to, stop us if you’ve heard this before, get too cutesy with the puck and don’t crash the net. Instead of making a higher-percentage pass, guys like Alex Ovechkin, Alex Semin, Nicklas Backstrom and Mike Green all try to earn a spot on the highlight reel with high-risk passes through heavy traffic. When they work, it’s a thing of beauty. Unfortunately, the odds aren’t usually in their favor. Instead of forcing the puck, especially on the powerplay, they should simply regroup by passing back to the point and setting up the play again.

Crashing the net may not be glamorous, but it’s effective. Screening the goalie and increasing the traffic in front of the net always improves your scoring chances. Plus, if the goalie makes the initial save but can’t haul in the puck, then someone is on the doorstep to bang home the juicy rebound. Other than maybe Brooks Laich, who else on the Capitals shows a willingness to stand there and take the abuse from a defenseman trying to clear the zone? The answer is no one.

The Capitals have not given up an even-strength goal in their last three games. While that is impressive, the fact that they’ve given up five powerplay goals over that span is troubling. For the season, the Caps are the fourth-most penalized team and their penalty-killing percentage is 78.9, 24th in the league. So to recap, they take a lot of penalties and don’t do a very good job of killing them. That’s never good.

If we’re going to take this team seriously, guys like Ovechkin and Semin (who are second and fourth on the team in penalty minutes) need to learn to stop taking foolish penalties, especially with the game on the line (like Semin’s terrible penalty against Ottawa with just over three minutes left in regulation).

While the Capitals have been automatic at home this season, they are just 11-12-2 away from the Verizon Center (the 14th best road record in hockey). As previously mentioned, teams are going to get fired up to play the Capitals, especially out on the West Coast where it might be the only time all season Alex Ovechkin and friends come to town. With the Caps’ average road attendance nearly 97 percent, it’s safe to say that the team is playing in front of a packed house night in and night out. Bringing that same level of intensity each and every game helps to prevent trap games against those teams who will be watching the Stanley Cup playoffs on TV come April.

The last concern is the amount of minutes the team’s biggest guns are playing. Green is averaging more than 25 minutes of ice time per game. Ovechkin is over 23. Backstrom, Semin, Alzner, Schultz and Poti (before his injury) are all above 19 minutes. It’d be nice if the coaching staff could lean a little less on the marquee players in the regular season, so they still feel fresh come playoff time. Seven Capitals players have scored at least 10 goals this season, so let’s spread around the ice time a little more evenly and save the major minutes for guys like Green and Ovechkin for the postseason.

While this post focuses on the negatives, please understand where we’re coming from. The Capitals, unlike any other team in town, has heightened expectations. Unlike the Redskins or Wizards, simply going .500 for the year is unacceptable. They have a deep roster with loads of talent and, for the first time in a long, long time, have a legitimate chance to do some damage once the regular season concludes. Addressing some of these concerns simply increases their chances of bringing a championship to D.C. for the first time in franchise history.