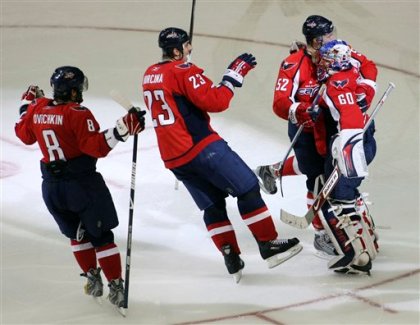 The Washington Capitals came into Tuesday night’s game with seemingly everything right in the world (some would say they even had God on their side).
The Caps’ 26-11-3 record was the best in franchise history through 40 games. Their 17-1-1 record at the Verizon Center was the second best in the NHL (behind San Jose’s 19-0-2 mark at home). They were also tied with the Sharks for the NHL’s best winning percentage when scoring the first goal of the game (.826). The Caps were second place in the Eastern Conference, had the fourth most points in the entire NHL, and a 10-point cushion over Carolina in the Southeast Division. Like we said, there were countless reasons to rejoice.

But none of that mattered Tuesday night. Not with the Philadelphia Flyers in town.

Sure, the Caps had won nine out of their last 10 games, but that one loss was a 7-1 drubbing in Philadelphia, Dec. 20. Even coach Bruce Boudreau admitted the teams don’t like each other, while also openly acknowledged the fact that the Flyers kept their top players in the lineup well after the 7-1 game was all but over didn’t sit well with his team.

And, oh by the way, this is the same Flyers squad who eliminated the Caps from the postseason in a game seven overtime thriller the last time they visited the Verizon Center. If this was an old-school wrestling match, the announcers would be talking about how much “personal animosity” these two teams had towards each other heading into this “slobberknocker.”

“We have to be ready,” said Mike Richards, of the Flyers, leading up to rematch. “We kind of took it to them last time, and we have to understand they’re going to be gunning for us.”

So what happened once the puck dropped and these two worthy adversaries collided?

Well, the Caps drew first blood just 19 seconds into their first powerplay and just 2:10 into the contest on a Nicklas Backstrom tally. The Swedish center was standing on the doorstep and slammed the puck past Flyers goalie Martin Biron.

The Flyers came into the game with a league-best 13 shorthanded goals. Call us crazy, but we’re of the mindset that one surefire way to keep them from adding to that total is to score 19 seconds into every powerplay you have.

One thing we’ve noticed this season is that the Capitals get into trouble when their top skill players get too cutesy. If guys like Backstrom stop trying to make the perfect pass and instead crash the net with regularity, then there’s not many teams that can stop this high-powered attack.

Oh, and the last time these two teams faced off, Flyers goalie Antero Niittymaki made 25 first-period saves without allowing a goal. This time around? Biron gave up a goal on just the fourth shot of the night. Biron sir, you are no Niittymaki.

At this point, we leaned over to a fellow media member in the press box and wondered allowed how the Capitals would look after their initial surge. It was fairly easy to predict a fast start for the good guys, what with Boudreau poking his players with a stick leading up to the game and all. But how would they look once the game settled into a groove? No team can keep that level of intensity for an entire game, so what effort would the team have during the second and third periods?

The answer was … well … unanswered. Clearly the players were still giving their best effort, but the second and third periods featured uneven and sometimes sloppy play. One shift the team looked great. The next, the Flyers players seemed to be moving with a higher sense of urgency. After several near misses, the Flyers finally tied the game at 1-1 when defenseman Braydon Coburn scored a powerplay goal 23 seconds into the third period.

In perhaps the only suitable ending for such a highly-touted regular-season matchup, three regulation periods weren’t enough to decide things. Neither was an overtime period, for that matter, which meant a shootout would decide things.

As recent history has shown, the Caps aren’t very good at shootouts. In fact, one might go as far as to say only two players on the current roster are reliable in the one-on-one format – forward Victor Kozlov (who is great in shootouts and not so good in the playoffs) and goalie Jose Theodore (who was 10-3 in shootouts for his career).

As luck would have it, those two were enough to get the job done. Theodore turned away all three Flyers players and Kozlov scored the lone shootout goal to give the Caps their 18th win in 20 games. While winning the 41st game of the season doesn’t guarantee anything, it does go a long way to give this team confidence that they can win in a variety of ways. They’ve shown they can matchs goals with the best of them, but winning these low-scoring affairs is also vital – especially come playoff time when defenses tighten up and scoring is at a premium.

Perhaps most of all, the Capitals beat the Flyers. Was it as satisfying as a 7-1 drubbing or ending a rival team’s postseason hopes? No. But it’s a start. And what logical Caps fan couldn’t be satisfied with that.

The Capitals, like most teams, have a 24-hour rule. They’ll enjoy the win for the rest of the night, but the next day, its back to business as usual. When the puck drops Friday night and the Columbus Blue Jackets are in town, the last thing on their minds will be the Philadelphia Flyers or some media-driven rivalry between goons. We suggest fans do the same. If the rest of this season is any indication, there will plenty more to cheer about between now and the end of the regular season.