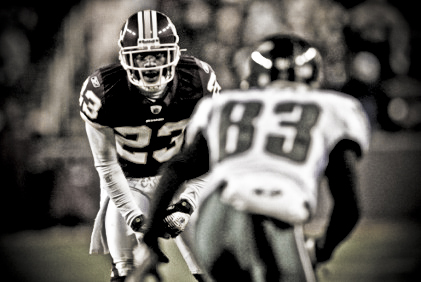 “He beat me, straight up. Pay him … pay that man his money,” – Teddy KGB, Rounders

Earlier, we focused our attention on the Washington Redskins’ lack of continuity from year to year, and how some of the current players suggested maybe the front office should take a page from the Pittsburgh Steelers and New England Patriots playbook if they’d like to become one of the NFL’s elite.

Cornerback Fred Smoot even went as far as to suggest that if it were up to him, all 53 men currently on the roster would be brought back next season. While that’s not completely feasible (the team does still have four draft picks burning in its pocket), the basic mentality of not blowing everything up and starting over from scratch every year or two is a wise one.

Along those lines, it has become readily apparent what the team’s number-one priority should be during this offseason. If management accomplishes nothing else, they should sign cornerback DeAngelo Hall, a free agent-to-be, to a long-term contract as soon as humanly possible, because with each passing week he continues to make himself more and more money.

At 24, Hall possesses all the athletic ability a talent evaluator could ever desire. The two-time Pro Bowler also has uncanny instincts and most importantly, can actually intercept a pass from time to time. That’s something the rest of the Redskins secondary can’t say. On a defense that struggles to create turnovers, Hall is the one playmaker who has a nose for the ball.

You didn’t have any interceptions tonight, but you had a strong showing. Would you say this was your best game as a member of the Washington Redskins?

“I think so,” Hall said. “Just to go out there and make a difference and make the plays when it counted in the clutch. It feels good to help a team win a game, especially this team. You know, we need wins bad. We need wins bad. I just wish we could have picked them up earlier.”

You were really physical with DeSean Jackson and the Philadelphia Eagles receivers. That’s an area of your game that we don’t hear a lot about. Do you think that made a difference and played a part in the Eagles dropping so many passes?

“I hope so,” Hall said. “Guys were just hitting. Period. It wasn’t so much we were trying to just hit him. We were just trying to hit everybody, make them feel us. They definitely dropped a couple balls out there. I don’t know if they were anticipating contact or what, but they definitely dropped a couple balls and we made a couple plays, breaking up passes. Any time you can do that as a defense and as a secondary, you’ll have success.”

Fred Smoot said you were in the zone against the Eagles and that even when you weren’t in the best position, you were still able to make a play.

The very next thing Smoot said was that if it were up to him, he’d bring back all 53 players on this roster. You’re one of them, man. What do we have to do to keep you in town?

So here is our plea to management – sign Hall now. Even the Washington Nationals, who are allergic to spending money, were willing to break out the wallet and sign a playmaker with local ties. That’s what you’ve got now with DeAngelo Hall, and lord knows spending money has never been an issue at Redskins Park before. Lock this guy up before it’s too late. With young talent like LaRon Landry, Chris “The Predator” Horton and Hall in the secondary, there’s a lot for ‘Skins fans to be thankful for this holiday season. Don’t take that away from us.

[Update: Jason la Canfora of the Washington Post reports that the Redskins have engaged in preliminary contract discussions with potential free agent corner DeAngelo Hall in hopes of signing him to a long-term contract. This is good news.]