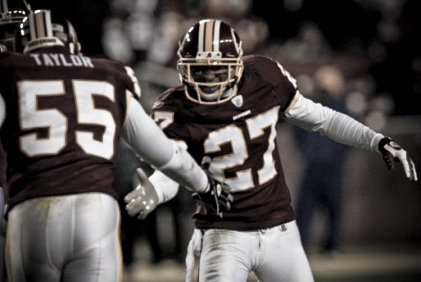 “There’s a normal turnover of 13 to 15 players on every team every year,” said Vinny Cerrato, the Washington Redskins executive vice president of football operations, on his radio show this week.

That’s not exactly music to ‘Skins fans’ ears, not when they’ve become increasingly frustrated with what many perceive to be a lack of any sort of plan at Redskins Park. One year tons of money and draft picks are thrown around as free agents like Brandon Lloyd or Adam Archuleta are given the VIP treatment involving the owner’s jet, a fancy dinner and courtside seats for the Washington Wizards. The next, the draft is suddenly the focus and three pass catchers are selected in the second round.

Trying to figure out which direction Cerrato and friends are going from year to year (or even day to day) can be maddening. That’s why, with the Redskins officially eliminated from the playoffs, many have turned their attention to the upcoming offseason. And we’re not just talking about the fans.

“If you ask me, bring all 53 Redskins back and let us be like a Pittsburgh Steelers,” said cornerback Fred Smoot. “Let us get to know each other, let us know what each other can do so we can go to war together. The reason a team like Pittsburgh or New England never has a down season is because of continuity. They’ve got familiar faces who’ve gone to war together. You can’t replace that with no talent.”

When told of Smoot’s comments, his teammates immediately jumped on board.

“I say the same thing,” said safety LaRon Landry. “I’m not really looking for no new guys or anything. That’s something for the recruiting staff and all of that, but I think we’ll be a damn good team on defense next year if we keep the same guys.”

While Landry chose to focus solely on the defensive side of the ball, other players took a broader look at how this upcoming offseason could affect what is considered a very tight-knit locker room.

“This business is just so tough and changes are always being made,” Carter said. “I really hope and pray that we’re able to keep some continuity for the team as a whole because we have so much potential. As a player, the only control you have is to go out there and play hard for 16 to 20 weeks. It’s kind of like the game tape is an interview, and I don’t know what they’re going to see upstairs or what changes are going to be made. But honestly, I wouldn’t change these guys for the world.”

If we were playing the role of general manager there would be some changes. Not a complete overhaul by any means, but there are a few areas of concern. Getting younger on the offensive line is a must, as well as replacing some of the older players who have trouble getting on the field (see: Springs, Shawn).

But as we see it, the best way to proceed is with Jim Zorn as head coach and much of this roster still intact. To completely blow this team up and start over or to bring in a half dozen free agents only adds credibility to the folks who are convinced management continues to make it up as they go along. Resist the urge to do something radical. If for no other reason than because stability throughout the organization is vital if the Redskins ever want to join the Steelers and Patriots among the league’s elite. At least that’s how we see it. Feel free to leave your thoughts on the subject below.