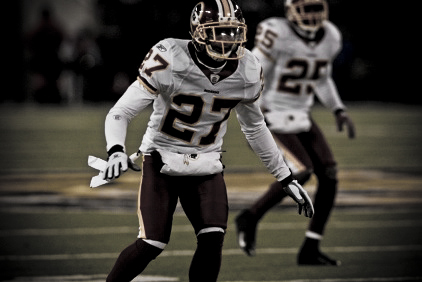 More than 18,000 fans were on hand last week to see the Washington Capitals exciting 5-2 win over the New York Islanders, and now at least two individuals consider themselves Caps fans because of it.

Redskins cornerback Fred Smoot and kick returner Rock Cartwright took in their first hockey game that night and both came away loving what they saw. Much like tight end Chris Cooley and quarterback Jason Campbell before them, they stopped by the Phone Booth to see what the fuss was about and came away with a new appreciation for a sport they knew nothing about.

This week we had a chance to catch up with Cartwright and Smoot to find out exactly how they ended up attending their first professional hockey game and their thoughts on a sport neither had ever given much thought about before last week.

Freddie, what the hell do you know about hockey?

Be honest, you thought Beyonce was in town, right?

(Laughs). “Nah, [Capitals star Alex] Ovechkin came to a Redskins game, I told him I’m coming to a hockey game,” Smoot said. “I showed up, he winked his eye at me and they won.”

How much did you know about the game and the rules coming in?

“I didn’t know anything and it’s always hard to follow a sport that you don’t know the rules of, but they kind of gave me the breakdown and taught me some of the rules and things. Man, it’s a great sport. I’m going to another game this week.”

“Brashear got the game winner,” Smoot said excitedly. “The only black guy. You know what, when I came out there I was like ‘What’s he doing out there?’ Hey, they say he’s been a great player for like 12 or 13 years. That just goes to show you how little people actually know about the sport. I like it, man. I’m taking it on head first.”

So are you making an announcement here? Are you becoming a two-sport athlete?

“I don’t want to say that,” Smoot said. “I did realize something though. We’re physical, but they’re very physical too. Very physical.”

Still cracking up from the thought of Smoot trying to lace ‘em up, we headed over to chat with Cartwright. Hey Rock, what do you know about hockey?

“I just had a chance to go out and experience something I hadn’t experienced before and it was pretty nice. I think I have to go back to another game,” he said.

Seriously, did you think the Wizards were in town?

“Nah, I knew the hockey game was going to be played and I wanted to check it out,” Cartwright said. “I had some guys explaining to me what was going on because I didn’t know what was happening at first, but some guys sitting behind me helped out.”

What appeals to you about the sport of hockey?

“Everything,” he said. “It’s pretty amazing. From watching it on TV to watching it live, it’s interesting. The guys are real physical out there. That’s what I liked the most. I didn’t see much of that growing up in Texas, but it was nice. I’ll definitely be going back.”

So if you’re attending the Caps game tonight against the Boston Bruins or Friday night against the Ottawa Senators and you happen to be sitting next to a loquacious cornerback from Mississippi, feel free to lean over and teach Smoot some of the intricacies of professional hockey. The guy loves the sport but still has a lot to learn. Maybe in exchange for your help, Smoot will give you an energy bar, or better yet, invite you out to the Love Boat.