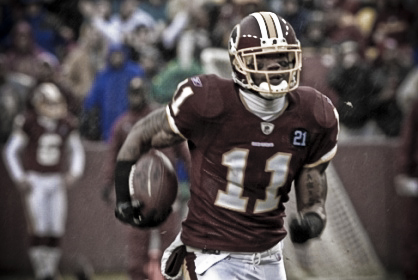 September 21, 2008 was the happiest day of Devin Thomas’ short professional football career. He had just finished high stepping to the endzone to cap a 68-yard touchdown play only to find out that it didn’t count because of an ill-timed penalty by teammate Stephon Heyer half a football field away. Although the rookie wide receiver’s highlight-worthy play was taken away from him, the Washington Redskins were still able to defeat the Arizona Cardinals 24-17.

Fast forward to November 30, 2008. Although Thomas was held without a catch for the sixth time this season, the 23-7 loss to the New York Giants will be a game the Michigan State product won’t soon forget.

On first and 10 from the Giants 29-yard-line, Redskins quarterback Jason Campbell took the snap and tossed the ball to running back Ladell Betts, who was racing to the left. Simultaneously, Thomas reversed back from the left towards Betts, who handed him the ball. After key blocks by Campbell and wide out Santana Moss, Thomas was able to outrun the rest of the Giants defense who had over pursued Betts and lunged into the endzone for the first touchdown of his NFL career. Everything about the play was perfect … except for one small detail. In all the excitement Thomas somehow misplaced the ball. Luckily, a Redskins staff member found the ball and tucked it into the rookie’s locker.

“It feels great, man,” Thomas said with a smile after the game. “I just realized someone put the ball in [my locker] for me. I thought I had lost it and its back, so I’m happy with that.”

Now that you’ve got the ball again, where is it going to end up?

“In my trophy case,” he said. “My first touchdown, it’ll go right on the mantle over the fire place.”

What other souvenirs or memorabilia do you have there?

“Everything else, my dad’s got,” Thomas said. “I’m still trying to build my resume in the NFL.”

Walk us through the play. It looked like you really had to fight those last five yards to make it in the endzone.

“Right,” he said. “It was so wide open, the only guy that was left was that DB and I’m seeing ‘Tana blocking him and I had two ways to go. I’m thinking, ‘Do I want to go up the middle or move it outside? Okay, ‘Tana is doing a good job. I gotta make a decision. Okay, I’ll take it outside.’

Although this was the first time Thomas had had the chance to recount the story of his first touchdown, he already sounded like a veteran story teller.

“Santana looked like he tried to chop him and the guy was going down and went for my legs,” he continued. “All I’m thinking is, ‘Man, if I get tripped up on the five or four or something,’ so I put the stiff arm out there and started stumbling. I just decided to dive for it and made it into the endzone. I would have done anything – barrel rolled or anything – to get in there. So it felt good.”

What do you say to the people who continue to voice their displeasure with the lack of production from the Redskins’ three rookie pass catchers?

“People gotta understand, we’ve got a lot of explosive players on this offense,” he said. “You’ve got [tight end Chris] Cooley. You’ve got Santana. You’ve got a lot of veterans. Coach is steady trying to put me, Malcolm [Kelly] and Fred [Davis] in there somehow. It’s tough, especially when you’re calling plays and things ain’t going the way they’re supposed to. We’ve got to be patient and the fans do too.”

If this offense has all those weapons, then where are all the points?

“Exactly,” he said. “That’s the hard thing about it. We’ve got so much firepower, so it’s like ‘Why aren’t we putting points on the scoreboard?’ We’re still working on that and everybody is wondering what’s going on, but it’s going to come together some way or somehow. It’s got to. We’ve got everyone motivated. We’ve got enough talent. We’ve just got to find a way to make it happen.”

It might have taken two months longer than he wanted, but Thomas is finally contributing to this offense. As he continues to grow in this offense and gain the coaching staff’s trust, Thomas can only expect to become more and more involved. Hopefully he can develop into a reliable option to compliment Cooley and Moss. Then maybe he can add a couple more collectables to that mantle above the fire place.