high stepping for nothing 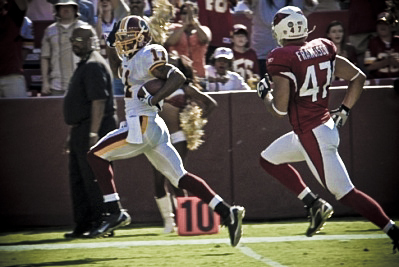 Call it the best play of Devin Thomas’ career that never happened.

With just under nine minutes remaining and the Washington Redskins clinging to a 24-17 lead over the Arizona Cardinals, quarterback Jason Campbell rolled out to his right to avoid pressure and connected on a 68-yard touchdown dagger to Thomas, sending the sellout FedEx Field fans into a frenzy.

“We snapped it real fast and I think we caught the defense off guard,” said Thomas, the rookie wide receiver from Michigan State. “I don’t think they were in their set – whatever they was going to be in. The corner, he was kind of stuck, I went around him and I just ran up the sideline.”

What happened next was a scene much more common in high school football than the pros – Thomas was so wide open that the nearest defender was more than 10 yards away. If his quarterback saw him and got him the ball, there was little doubt what would happen next.

“With Jason [Campbell] rolling out everybody sucked up, so I was just waving my hands and hoping Jason could see me,” Thomas said. “He saw me, and I was just hoping I could catch the ball. All I cared about was catching the ball and then I just knew it was over. I looked up at the big screen and didn’t see anybody around me, so I just did what I did, like when I watched the guys back in the day. I started dancing and stuff … until I realized it had been called back.”

The play was called back after offensive lineman Stephon Heyer was flagged for unnecessary roughness because of a blindside hit on defensive tackle Darnell Dockett half a football field away.

“It’s alright, I was just happy we won the game,” Thomas said. “I was hoping that play could have helped us, but thankfully we was able to grind it out and get the ‘W.’”

With the game-clinching scored wiped away, the Redskins were forced to sweat it out a little longer, but still managed to secure their second-straight home victory. Thomas finished the day with one catch for seven yards, one rush for 16 yards and one apology from Heyer.

“I told Devin I was sorry,” Heyer said after the game. “I told him he’s got a lot of NFL left, he’ll make another touchdown.”

In the locker room after the game, I had one final word of advice for Thomas for when he does finally register his first NFL touchdown – get in the endzone first, then have fun. Don’t pull a DeSean Jackson and leave the ball at the one yard line.

Here’s hoping Thomas gets to unveil his first touchdown celebration next week in Texas Stadium.