veterans versus the predator 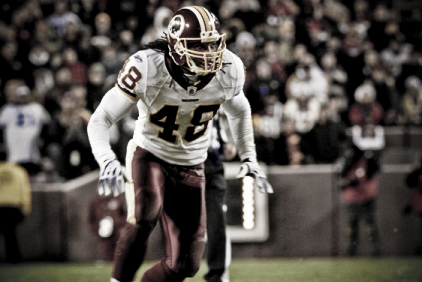 With the Washington Redskins losing 14-10 to their hated rival, the Dallas Cowboys, Sunday night, we know ‘Skins fans haven’t been doing well this week. If the team only wins two games each season, fans always want them to be the two matchups against the Cowboys. We can’t change history and have the Redskins win the game, but we can cheers folks up with our weekly conversation with Redskins rookie safety Chris “The Predator” Horton.

We saw you on the NFL Network last week talking about your new website. Why don’t you tell us a little bit about it?

“I’ve got a new website, Predator48.com, and it’s just a way for people to find out who Chris Horton really is,” said Horton. “He’s not just a football player. I do a lot of other things outside of football.”

We know the site just launched, but what content do you plan on having on the site?

And this is all you? This isn’t some marketing guy pretending to be you online or something?

“It’s me,” Horton said. “It’s all me. When I find some time … I don’t really get back to people right away, I just kind of find time here and there. Usually on Tuesdays I’m on it a lot.”

You’re a seventh-round draft pick and you’ve already got your own website halfway though your rookie season. Things are coming along pretty nicely for you, right?

“Definitely,” he said. “I’m just trying to find ways to continue my success on the field.”

And the whole “fans giving you the nickname” thing, it looks like you’ve embraced it.

“Yeah, I took it and ran with it,” Horton said.

From there, we headed over to defensive end Andre Carter, one of the most respected players in the Redskins locker room. After dissecting what went wrong against Dallas, the conversation turned to Horton and his brand-new website.

One of your rookies, Chris Horton, just launched a new website this week. Have you heard of Predator48.com?

We’d like you to tell us, as a veteran whose been in the league for a while, what you think of a rookie launching his own website halfway through his first season.

Did he run it by the veterans first?

“No he didn’t run it by us, but we’re gonna get on him now that you told us,” Carter said. “I think me and the committee of older guys – Griff [Cornelius Griffin] and Phil [Daniels] – are gonna have to sit down and discuss that. Kind of sit down and see what we’re gonna do about that.”

What’s your opinion on the whole “Predator” nickname?

It came from the fans.

“The fans gave it to him,” asked Carter.

Yup, they gave it to him.

“Wow, that’s love then,” he said. “It’s okay then. I thought he gave it to himself. I got to give it to Chris. He’s a smart guy and he knows how to network. Especially in this business, if you can network then you can do good for yourself. You got to think of life after football.”

So are you announcing with us that you’ll be launching Dre99.com?