the predator has arrived 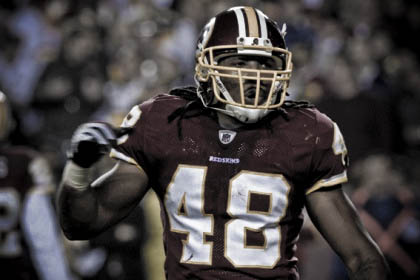 We had hoped to catch up with Washington Redskins rookie safety Chris “The Predator” Horton after the 23-6 loss to the Pittsburgh Steelers Monday night, but he was in the trainer’s room getting some bumps and bruises looked at by the time the media-types were allowed in the locker room. Luckily for us, Horton’s popularity continues to grow and he was an in-studio guest on the NFL Network’s Total Access yesterday. While most of the conversation centered on being a rookie and the improbable start to a seventh-round draft picks’ career, the end of the segment was very interesting.

One of the NFL Network guys asked – “Predator48, is there something significant about that?”

“Yes, my marketing guys kind of launched a new website that actually launched today – Predator48.com,” Horton said. “It’s a great thing coming from a guy like myself who never really got all the fun things all the earlier picks got. I think it’s a good thing and it’s my nickname out in D.C., so it’s gonna be fun.”

All of this attention for Horton is great for many reasons. First of all, it shows just how unpredictable the NFL scouting and draft process truly is. Horton was the 249th overall pick in the 2008 draft, and by all accounts the Redskins got a steal by finding an impact player so late in the game. And while every other team in the NFL passed on the UCLA product multiple times, even the Redskins looked over him nine other times.

Look no further than the trio of second-rounders the team selected – wide outs Devin Thomas and Malcolm Kelly and tight end “Sleepy” Fred Davis have a combined nine catches for 69 yards through eight games. With three interceptions, Horton has gotten his hands on three times as many passes as Davis and Kelly combined. And then there’s that whole rookie punter situation that’s best if we pretend never happened.

The moral of the story is, Horton is a helluva player and a seemingly genuine guy off the field. We’ve certainly enjoyed each of our conversations with the kid and folks in the Redskins organization swear he’s the real deal. The fact that this website coined “The Predator” nickname is simply a bonus. So head over to Chris Horton’s official website and maybe even pick up a Predator48.com t-shirt. If that’s not your style, then head over to the Homer McFanboy store and pick up our Predator t-shirt to show your support for one of the best stories of the 2008 NFL season. Christmas is coming. Horton has arrived.