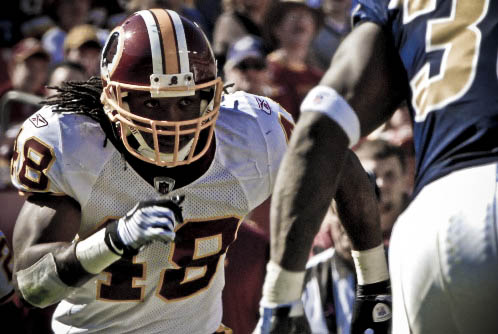 Ladies and gentlemen, it’s time once again for what has become our weekly conversation with rookie safety Chris “The Predator” Horton. Last week, the topic of conversation was on his Hollywood-inspired nickname. This week, we had even better news for everyone’s favorite rookie.

That’s because this past Sunday, while heading into FedEx Field, we saw something special – we saw Redskins fans tailgating before the game in number 48 Chris Horton jerseys. We even stopped the fans sporting the brand-new burgundy Horton jerseys and were promised that their apparel was not, in fact, custom ordered. We knew the kid was catching on, but we had no clue he’d reached a point where the NFL already felt the need to try and cash in. Since this was news to us, we figured it was as good an excuse as any to catch up with The Predator.

How special does it feel for a seventh-round draft pick to already have his jersey for sale roughly a month into his first season?

“It’s exciting,” said Horton. “I feel privileged that the Redskins gave me an opportunity and that they drafted me. I’m just making the best out of it. A lot of teams passed me up because they said I couldn’t play, but the Redskins saw something in me and said, ‘This kid could be special one day.’”

Have you seen any fans sporting your jersey yet?

“Not yet,” he said. “But it’s going to be exciting, you know. I’m glad they’re showing their support for me. I’m going to continue to keep coming out and giving them my best football.”

And most importantly, why should fans spend their hard-earned money on a Chris Horton jersey?

“Because I feel like I’m the underdog,” he said. “No one ever gave me a chance to come out and play, and I think [the Redskins] got a guy with great character who does everything the right way on and off the field. I’m going to give Redskins fans everything I’ve got every Sunday.”

A personal promise from Horton to thank fans wearing his jersey by giving 110 percent each and every Sunday? If this isn’t enough to make diehard fans spend their paychecks on a Horton jersey instead of other frivolous items such as gas or groceries, then we don’t know what is.