to name a predator 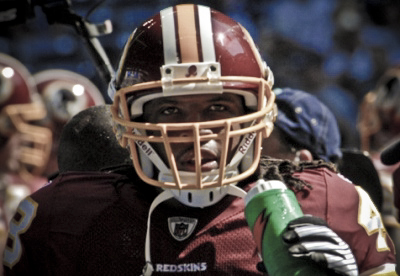 With the way things have gone here at Homer McFanboy over the last couple weeks I was worried we were heading into high school gossip territory. Even though we weren’t saying anything negative, we’ve been sitting here talking about a certain player behind his back lately, and we just didn’t feel comfortable about it. So today, we confronted the situation and pulled rookie safety Chris Horton aside.

We’ve got to bring something to your attention. It seems the fans have given you a nickname …

“I think I already know it,” Horton said. “The Predator?”

This really was becoming high school, with Horton surprising me by already having the nickname get back to him. Rattled, I tried to press forward.

As a safety who seems to have a knack for being around the football that’s a compliment, right?

“Yeah, it’s a funny name, but when I think about how that guy looks I don’t know if that’s so much of a compliment,” he said with a laugh.

My guess is, unlike in basketball or other sports, the fans can’t really see your face. They just see the helmet and the hair as you swoop in and make another play.

(Laughs). “It’s a good thing, I guess,” he said. “The Predator, his role, he’s a deadly guy. Some of the things he did and some of the weapons he had in the movie were insane. So I guess it’s a good thing.”

And what are some of the weapons you have?

So its official – Chris Horton approves of his new nickname “The Predator,” which is great because my neighbor kid has already put “gave an NFL player a nickname” on his resume.