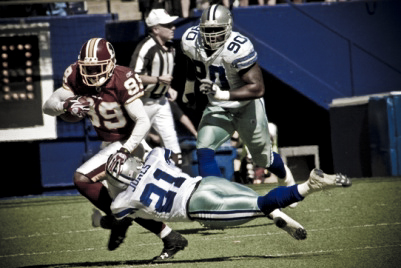 It’s no secret, I’m a stat nerd. I can’t just watch a game, see a statistic at the bottom of the screen and be content. No, I have to take that small nugget of information and run with it, using it as a starting point to try and gauge what to expect the rest of the season or figure out a historical comparison.

So when the NFL Network says that Redskins quarterback Jason Campbell led the NFL in fumbles last year and points out he hasn’t turned the ball over once this season … well … that’s my starting point. You can bet on me spending the next hour or two digging around to see just how much better Campbell is playing these days compared to previous incarnations.

Bottom line – Jason Campbell is playing his ass off. I mean, there’s no real other way to put it. He’s the fourth highest quarterback rating in the NFL, at 102.2. His completion percentage of 65.3 is eighth best in the NFL. But let’s take a deeper look at just how much Campbell has progressed. Here’s a breakdown of Campbell’s numbers after four games in each of the last three seasons:

We’re a quarter of the way through the season, and if we look at what Campbell has put up thus far, he projects to finish with the following statistics:

Completing 324 of 496 passes for 3,512 yards with 24 touchdowns and 0 interceptions. Those kind of passing yards and touchdowns are typically good for a top 10 finish among NFL quarterbacks. I think it’s safe to say that at some point this season Campbell will throw an interception, but the rest of the stats are numbers Redskins fans would be thrilled with.

Portis is on pace to finish the 2008 season with 344 carries for 1,476 yards and 12 touchdowns. As a refresher, Portis finished 2007 with 325 carries for 1,262 and 11 touchdowns. Last season Portis was picking up 3.9 yards per carry, while this season he’s averaging 4.3 yards per rush. While some folks quietly grumble that Portis is coming off the field too often during games, the numbers show he’s still being very productive. Any way you look at it, the Redskins are in good hands with Portis.

But the biggest reason opposing defenses are beginning to fear the Redskin newfound potent offense is Santana Moss, who ranks second in the NFL in receiving yards with 421. He’s caught 27 passes for an average of 15.6 per catch and he’s averaging 105.3 yards per game. Let’s compare those numbers to each of the last three seasons:

Couple things to point out: Art Monk had 104 catches in 1984. If Moss can stay healthy, he’s on pace for 108. And let’s not forget that Moss set the Redskins single-season receiving record in 2005. Moss’ current pace would blow that number out of the water, which is even more impressive when you remember that this is a 76-year-old franchise and Moss is trying to break his own record.

And here’s a special section for anyone who works with a Dallas Cowboys fan. Simply put, Santana Moss owns the Cowboys. We’re reaching Pedro Martinez, “Whose your daddy?” territory here. Seriously, just say his name and watch a Dallas fan wince. Here’s what he’s posted against the Cowboys the last three times these two teams have faced off:

And unlike Terrell Owens, you never hear a word out of Moss. As previously stated, his numbers do the talking for him. But Moss isn’t the only Redskin getting it done. Jim Zorn became the first Redskins rookie head coach to win in Dallas in 37 years, joining the great George Allen as the only ‘Skins rookie head coach to win his debut in Dallas since 1971. (That’s not the only thing those two coaches have in common).

Here’s two other areas that are a direct reflection of Zorn’s identity on this team:

The Redskins offense is ranked 9th in the NFL averaging 342 yards per game, up from 15th a year ago when they averaged 333 yards per game.

The Redskins are tied for the league lead with a plus six turnover differential, and have not had an offensive turnover all season long. The Washington Post reports that the last time the ‘Skins went four games without a turnover was 1990.

In the Dallas post-game press conference Moss spoke about all of the wacky drills Zorn has come up with for Campbell and the other quarterbacks. While it seemed odd at first to see Zorn making his QBs play dodgeball and go through other random drills, it now makes sense. Campbell is able to sense the pressure, step up and deliver the ball downfield to Moss, Chris Cooley or one of his other targets. The coach might not be conventional, but no one can argue with the results.

So needless to say, the offense is a cause for celebration in D.C. We’re seeing a side of the Redskins that’s been missing for a while now, especially if the ‘Skins continue to score 26 points per game like they’ve done during their three-game winning streak. Things are going so well on offense that we don’t even need to mention the defense.

The defense, a unit that’s been asked to carry this franchise for much of the ‘Skins recent history, is playing well in their typical bend-but-don’t-break style. Linebacker London Fletcher is playing his dominant brand of football, ranking second in the NFL in tackles with 36. He’ll get snubbed again this year for the Pro Bowl, but Redskins fans know how valuable he is.

Rookie safety Chris Horton (known in this neighborhood as “The Predator“) continues to overachieve, and is tied for second in the NFL in interceptions and leads all rookies in the same category with three. Horton had four interceptions in his entire college career and has three picks in his first four NFL games. That’s called stepped up when it counts.

But the cause for celebration would be the Redskins 3-1 record. While it doesn’t guarantee anything, the last three times the ‘Skins have made the playoffs they started the season 3-1. There’s a lot of football left to be played this season, but unlike in St. Louis, Detroit and Cincinnati, there’s actually a reason to tune in each week to watch the home team in D.C.