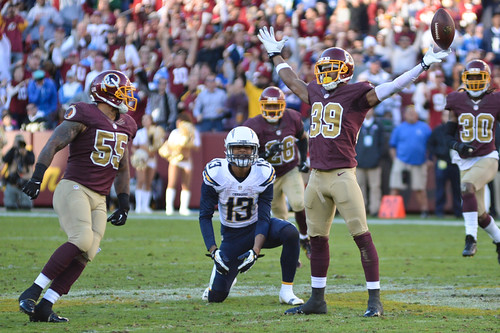 1. “Hail to the King” by Avenged Sevenfold

It wouldn’t have surprised me if fans of the Washington Redskins were less than enthusiastic about the team’s decision to hold their annual alumni homecoming game Week 9. After all, the Redskins came into the game against the San Diego Chargers winless in these nostalgic affairs — having lost 21-13 to Carolina last season and 19-11 to San Francisco back in ’11.

And yet, I can’t help but think that one of the primary reasons Washington was able to emerge victorious — defeating the Chargers 30-24 in overtime — had a little something to do with one of the old timers who was in the house Sunday.

Former Redskins quarterback Doug Williams, who was the most valuable player of Super Bowl XXII, and more than 30 of his teammates from that championship squad were honored during halftime. But before then, Williams had a chance to chat with local reporters about the burgundy and gold.

During a pre-game interview, Williams was asked what the Redskins need to do in order to salvage this season before it’s too late.

“You know, I think the guys that are here every day watching the Washington Redskins –- the coaches, the personnel guys –- they can probably answer that better than I can,” said Williams. “I can’t sit here watching them twice a year on TV and tell them what they need to do.”

And then, Williams was asked about quarterback Robert Griffin III. For a guy who just seconds earlier said he was too far removed from the situation to provide any real advice or feedback, he sure did manage to hit the nail on the head with this response.

“Last year, he came in and elevated his football team,” he said. “I think right now the football team needs to elevate Robert.”

As simple as it sounds, that’s what this team has lacked in 2013. With Griffin not quite playing up to his all-pro standard as he recovers from major knee surgery, it’s become painfully clear that he can’t do it all by himself these days.

If the the Redskins are going to be able to turn things around and be a more competitive football franchise in the second half of the season, it’ll be because players other than the franchise quarterback were able to help shoulder the load.

It’s only fitting that on homecoming weekend, the Redskins featured a “turn back the clock” performance by the offense.

Last season, the Redskins boasted the NFL’s top ground game. Against the Chargers, they were at it again — dominating the line of scrimmage to the tune of 209 yards on 40 rushing attempts while holding the ball for more than 40 minutes.

“I feel like that was a lot of what we were doing last year,” said center Will Montgomery. “We were able to get over 200 yards rushing, and that’s obviously a plus. It hasn’t happened too often lately, but we were able to get the ground and pound going and were able to make some big plays.”

Washington’s seven 200-yard rushing games since ’12 are the most in the NFL and three more than any other NFL team during the same time frame. Also, running back Alfred Morris posted season highs in rushing attempts (25) and rushing yards (121), and, in related news — the Redskins are now 10-1 all time when Morris has 20 or more rushing attempts.

And just like Williams predicted before the game, once some of the other guys on offense stepped up their game, it made everything a little bit easier on Griffin — who threw for 291 yards on the day and was able to complete nine passes of 10 yards or more on the day.

“It’s just making plays. We did it all last year – the majority of the year,” said head coach Mike Shanahan. “That’s why we had so much success both in the running game and the play-action game. But I think that’s what you’re working for. If you get that running game going, all of the sudden you execute some big plays, but guys have to go out there and make some plays.”

In 52 career regular season games, Redskins fullback Darrel Young had just one career rushing touchdown, and it came against the New York Giants back in 2011. Well, the fourth-year pro clearly made up for lost time against the Chargers Sunday — tying a team record and setting a career high with three rushing touchdowns, including a walk-off four-yard score in overtime.

“Honestly, that play’s been in for a couple of weeks, but when we get down on that goal line, I appreciate Alfred so much that I love blocking for him,” Young said. “I’d do anything to get him in the end zone, but it was game-planned for a little bit. Coach said when we get down there, it was going to be the first run call this week, so I appreciate him trusting me in a situation like that.”

Young finished the day with five carries for 12 yards and three touchdowns. He didn’t go far, but he went far enough.

“We trust D.Y. with the ball,” Griffin said of Young. “He’s always had a pretty good rushing average for us. Three touchdowns, it’s probably one yard per carry, but hey, he doesn’t really care about that as long as he’s helping us win.”

Anyone who can appreciate a blue-collar worker should be thrilled for Young. Not only did he originally come into the league as a linebacker, but he’s a consummate professional and ultimate team player. Regardless of what team you choose to cheer for, those are the type of players people should want to see rewarded for their hard work and dedication.

“He does a heck of a job for us –- on special teams, as a fullback, he can actually go in there and work as a tight end. And we run so many running plays with a halfback and he’s a blocker –- they lose him,” Shanahan said. “And so to put him in that situation says a lot about our running game, our offensive line. And D.Y. does have the skills to make people miss, so that doesn’t happen very often –- when you give it to the fullback down there and he finds a way to get it in three different times –- but it didn’t surprise me.”

Clearly it surprised the Chargers.

Of course, none of this would have been possible if not for a goal-line stand in the final minute of regulation by the beleaguered Washington defense. Less than a yard away from a possible lost season, the Redskins were somehow able to hold off quarterback Phillip Rivers and company — thwarting one run and two passes to hold the Chargers to a field goal attempt and make overtime a possibility.

If ever there was a unit that truly fit the description of “bend, but don’t break,” it’s the Redskins current defense. Sure, they allowed Rivers to throw for 341 yards and allowed 10 points in the final 4 minutes and 10 seconds of regulation to make the game much closer than it ever needed to be, but they also had to interceptions and a possible season-saving stand.

They might not be the most talented bunch ‘Skins fans have seen in recent memory, but there’s definitely no quit in these guys.

5. “No surprise” by Theory of a Deadman

I would be remiss if I didn’t point out that the game wouldn’t have required overtime if the Redskins’ special team unit wasn’t so “special.” Each and every week they find new and creative ways to let down the rest of the team, and this week was no exception.

This week’s showcase in ineptitude featured not one, but two blocked field goals attempts. Not only that, but the first one came on the heels of a 16-play, 92-yard drive that took lasted more than nine minutes. To see the offense work that hard on their opening drive — on a drive that started on the one-yard line, no less — could have been devastating.

Fortunately, the offense and defense were able to somehow hold it all together and overcome the team’s pitiful weekly special teams display.