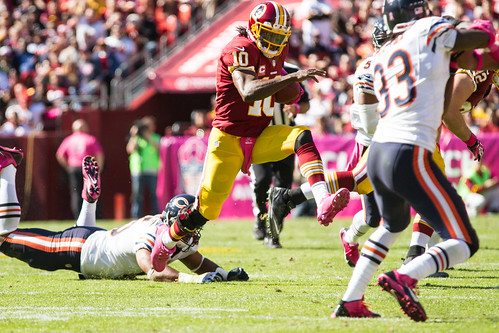 The list of areas the Washington Redskins need to improve upon is still lengthier than the list of what’s going right for the franchise, but that’s beside the point for the moment.

That’s because the Redskins earned their second win of the season — in comeback fashion, no less — scoring a touchdown in the final minute of play to complete a thrilling 45-41 win over the Chicago Bears Sunday.

The 45-point performance was Washington’s most productive outing during the Mike Shanahan era and the team’s most points since scoring 52 points against San Francisco back on Oct. 23, 2005, a span of 128 regular season games.

Equally impressive stat to consider: the last time the Redskins posted at least 499 yards of offense in a game that didn’t go to overtime, was back on Nov. 10, 1991 against Atlanta.

“We had a feeling about this game,” said quarterback Robert Griffin III. “I know I did. I talked to the guys before the game about having a breakthrough. We have been through a lot of adversity –- offseason, and the beginning of the season not going the way we wanted it to. We needed that breakthrough. I told them they would be the ones to make the plays to make it happen. I think the guys believed it; they saw it and we went out there to make it happen.”

Against Chicago, Griffin completed 18 of 29 passes for 298 yards with two touchdowns and one interception and finished the day with a quarterback rating of 105.2. Griffin also picked up 84 yards on 11 carries (both numbers represented season highs).

“Well, I think everybody saw what we did today in order to run a little bit more and keep the defense fairly honest,” Shanahan said. “He made some good plays. He was able to run the ball. He competed in the running game, and made some good throws on the run. He led a great final drive to put us in the end zone.”

2. “With Me Now” by Blacklite District

In fact, the Redskins were able to get the ground game going early and often against the Bears — rushing 43 times for 209 yards against a defense that not all that long ago was considered one of the best in the league. While Griffin had 84 rushing yards and running back Alfred Morris finished the day with 19 carries for 95 yards, the story of the game was backup Roy Helu Jr., who had 11 carries for 41 yards and three touchdowns.

When Washington did go to the air, it was usually in the direction of tight end Jordan Reed, who hauled in nine catches (on nine targets) for 134 yards and a touchdown. The third-round pick out of Florida might have started the season behind three other tight ends on the depth chart, but he is the undisputed starter these days.

“He’s got good hands,” Griffin said of Reed. “Like I like to say, he has a wide catch radius, so he can catch just about anything you throw at him.”

After the game, Reed said that although he has only been in Washington for a short time, he’s done everything he can to elevate his game at the NFL level.

“I was injured for the OTAs and we were just throwing – me and him – and it just carried on, Reed said of his chemistry with Griffin. “We just got a feel for each other out there and we just have to keep working on it.”

Griffin also credited their daily throwing session during the offseason as a reason why Reed has had success so quickly thus far.

“In the offseason, he just worked hard,” Griffin said. “He didn’t get to practice very much, just like I didn’t and we worked together. I tried to teach him little things, here and there. I’m no tight ends coach, but I am a quarterback and I kind of know what you’ve got to do to get the ball thrown to you so I tried to help him in that sense.”

When Helu is matching his career total for touchdowns in a single game and Reed is setting personal bests for catches and receiving yards, it’s a safe bet things are going well for the burgundy and gold.

Those two weren’t the only players raising their respective games Sunday. The Redskins also got key contributions from the other side of the ball as well, with outside linebacker Brian Orakpo getting his first career interception, which resulted in his first career touchdown.

“I’ve never scored, actually,” Orakpo said. “I started playing football in middle school and I never scored in middle school, high school, college or the pros. I’ve never had a pick in general. It was a crazy feeling. I was so excited that I didn’t know what to do once I got in the end zone. It was a phenomenal feeling. I’ve been preaching that I’m trying to get my ‘Ryan Kerrigan’ on, with all the picks he’s got –- and Rob Jackson. I’m trying to catch up a little bit.”

And there was defensive lineman Chris Baker, who registered his first career sack on a play that ultimately forced Bears quarterback Jay Cutler from the game due to a groin injury.

4. “Death With The Devil” by Pop Evil

Considering that — even after the victory — the Redskins are just 2-4, it might sound odd to suggest the team has been lucky this season. But that is absolutely the case because, week after week, key players on the opposing team continue to get knocked out of the game due to injury. The Bears lost Cutler, as well as linebacker Lance Briggs and cornerback Charles Tillman.

One week earlier, Dallas lost the services of running back DeMarco Murray and pass rusher DeMarcus Ware. Oakland lost running back Darren McFadden in a game they already were without starting quarterback Terrelle Pryor. Detroit played without running back Reggie Bush. Green Bay got exactly one carry out of running back Eddie Lacy, before a concussion ended his day prematurely.

Time and time again, the biggest names on the other side of the field have been injured, and yet, the Redskins have struggled to take advantage of the situation. Against Chicago, they nearly once again allowed an unheralded backup to get the best of them — as quarterback Josh McCown completed 14 of 20 passes for 204 yards and a touchdown with a 119.6 QB rating.

The law of averages suggests that, sooner or later Washington is going to have to face a healthy opponent.

The Redskins defense is still very much a work in progress. They allow 30.7 points per game (29th in the NFL) and 389 yards per game (24th in the league). They’re also one of the least disciplined teams — having already penalized 43 times in just six games for 378 yards.

The biggest offender is safety Brandon Meriweather, who was whistled for two avoidable penalties Sunday — one for a helmet-to-helmet hit on Bears receiver Alshon Jeffery and one on wideout Brandon Marshall. Time and time again, this guy has shown he is reckless and dangerous to those around him (including his teammates).

“I feel every hit I took was a legal hit,” he said after the game. “I wasn’t trying to be dirty. I wasn’t trying to hurt nobody. I didn’t lead with, lunge with my head. I used my shoulders like they told me to do.”

While that’s about the only possible defense Meriweather could have, opposing players view the way he plays a little differently.

“I understand big hits,” said Marshall. “That’s a part of our game, but when you have a guy that does it week in and week out, that’s when it becomes a problem.”

But more importantly, someone on the Redskins’ coaching staff needs to hold Meriweather accountable for his actions. Not only is he hurting opposing players, but he’s hurting his team as well. The NFL has made safety a priority, so hits like these are no longer acceptable. And honestly, Meriweather no longer deserves the benefit of the doubt. Either he needs to adjust to the new way games are called or his coaches need to find someone else to play safety. It really is that simple.