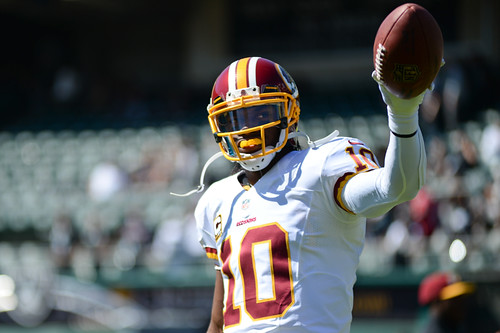 Because the government was shutdown and therefore decision makers in our nation’s capital had nothing else to do, the President of the United States felt compelled to share his opinion on the name of the Washington Redskins.

“If I were the owner of the team and I knew that there was a name of my team –- even if it had a storied history -– that was offending a sizable group of people, I’d think about changing it,” Barack Obama said in a recent interview.

Normally, the leader of the free world is expected to dedicate his time and attention to more pressing matters, but this time around he deserves a pass. In fact, if anything, we the people should request — better yet, demand — accountability from the National Football League.

With that in mind, it’s time to storm the streets and ensure our voices are heard. We won’t stop until all 32 NFL franchises have caved in and change their team names.

Arizona Cardinals – Is it too much to ask that they spend a little more time focusing on some of the problems that plague the Catholic church and a little less time employing mediocre quarterbacks?

Atlanta Falcons – As in, the Millennium Falcon — the getaway ride of Han Solo, the shady bootlegger who fought in a rebellion to overthrow the government who, by the way, is most famously known for shooting first.

Buffalo Bills – Have you seen the national deficit? This country is out of bills, which is why this franchise prefers to play “home” games in Canada.

Carolina Panthers – There’s a pretty big difference between the Pink Panther and the Black Panther Party. At the very least, this franchise needs to be a little more specific so folks know what they’re dealing with.

Chicago Bears – Seven people were mauled in five attacks by bears in the span of a week in August. Also, internet pictures of chubby, hairy dudes. Either way, we’re talking bad news.

Cleveland Browns – By singling out one specific color aren’t we just disrespecting the rest of the color palette?

Dallas Cowboys – Lynchings. Hangings. Gunning people down in the middle of town to settle a dispute. That stuff might fly in Deadwood, but it sure as hell isn’t socially acceptable today.

Detroit Lions – Cowardly. Today’s kids are already overweight pansies as it is, so let’s not encourage them to be wusses too.

Houston Texans – Much like the Cleveland Browns, naming a franchise after one specific state – especially one as mentally unstable as Texas – is a terrible idea.

Indianapolis Colts – Whether you’re talking about malt liquor or firearms, both typically lead to regrettable decisions.

Jacksonville Jaguars – Okay, anyone who has watched them play this season knows they’re harmless. Moving on …

Kansas City Chiefs – One of the major problems with our country today is too many people want to be “chiefs” and not enough people are willing to be “indians.” If everyone thinks they should be telling someone else to do the work, then nothing ever gets done. (See also: shutdown, government).

Miami Dolphins – If Ace Ventura taught us anything …

Minnesota Vikings – Known for raping and pillaging. And sex cruises.

New Orleans Saints – Have you ever been to New Orleans? Those people are a lot of things, but “saints” ain’t one of them.

New York Jets – Incapable of taking off or landing unless your electronic device is completely turned off. Multi-tasking is clearly not their strongest suit.

Oakland Raiders – Of the Lost Ark? We’ve already established that Harrison Ford is a poor choice for a role model for today’s youth.

Philadelphia Eagles – Does the endangered species list mean nothing to you people?

San Francisco 49ers – Talk about false advertising — it’s been more than a decade since San Francisco scored 49 points in a game.

Seattle Seahawks – No such thing. Might as well call them the Seattle Unicorns or try to find a Seattle fan who isn’t a pretentious douchebag.

Tampa Bay Buccaneers – I know Florida loves their stand-your-ground law, but even they have to admit it’s complete overkill to fire off cannons at the opposition every time the wind blows.

Tennessee Titans – Remember the Titans is a fantastic movie about a high school football team banding together to accomplish more than just winning football games, which would be great if today’s child labor laws weren’t so strict.

Washington Redskins – With apologies to Bob Costas and the rest of the smarmy talking heads who have jumped on this trendy topic, the first thing that comes to mind when most people hear the term “redskin,” isn’t “racial insensitive football franchise” – it’s “mediocre football.”