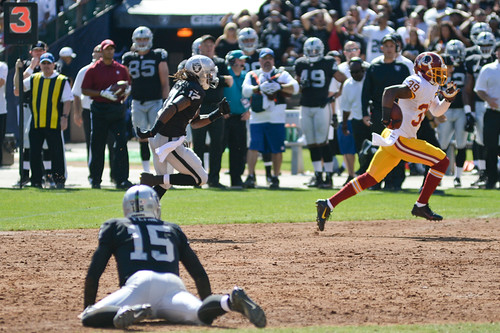 1. “All Nightmare Long” by Metallica

Before the first quarter had even finished it looked like the Washington Redskins were once again destined to disappoint.

A blocked punt for a touchdown and an 18-yard touchdown reception by a rookie tight end allegedly named Mychal Rivera had ‘Skins fans in a dark, dark place as they watched their favorite football franchise once again falter in the opening frame.

The offense once again struggle to move the ball in the early stages and the defense allowed a 10-play, 81-yard drive by Raiders backup quarterback Matt Flynn and a bunch of spare parts, and it wouldn’t have been unreasonable to wonder why the team would even fly across the country if they were just going to lay an egg.

After all, one week earlier the Detroit Lions used a no-name running back to defeat the Redskins. The week before that, the Green Bay Packers used an even less-heralded running back to steamroll Washington.

Would it really be out of the realm of possibility to see a mediocre Raiders team — without the services of some key players on their limited offense — defeat the Redskins during a time when very little has gone right for head coach Mike Shanahan and friends?

And then rookie cornerback David Amerson registered the first interception of his career barely four minutes into the second quarter, picking off Flynn and returning it 45 yards for the first touchdown of his NFL career.

Just like that, it was a whole new ballgame.

“We refused to go home and get on a plane with a loss. That’s something we emphasized,” said outside linebacker Brian Orakpo. “Guys came out here and played with a lot of passion and a lot of intensity. Regardless of all the adversity we faced in the first half, we came back and stuck in there.”

For as bad as the Redskins defense has been at times this season (and they’ve been downright terrible at everything from stopping bad running backs to taking dumb penalties to poor tackling), they continue to find ways to score touchdowns.

Coming into the season, Amerson told me one of the players he looked up to was veteran cornerback DeAngelo Hall. It’s fitting really, because there are times when both cornerbacks look like they’re more interested in trying to make a highlight rather than playing positionally sound defense. But on this play, Amerson looked like anything but a rookie.

He knew the play the opposition was trying to run on him and just outworked the receiver to be in a position when the ball came his way. He didn’t take an unnecessary risk or play recklessly, he simply waited for an opportunity to present itself and made the most of it.

After the game, Hall was clearly proud of how the rookie played in Oakland.

“That was especially big for Amerson to get that after giving up that one big play a little earlier,” he said. “That’s what I told him: ‘In this league, you give up one, you make one.’ He wound up getting one and just took it to the house. It was his first career pick, first career touchdown. That’s all you can ask for.”

3. “Hail To The King” by Avenged Sevenfold

Don’t be surprised if the Raiders offers a lucrative contract to Orakpo if/when he becomes a free agent after this season.

After all, in two visit to Oakland, the five-year pro has racked up an impressive six sacks. His first trip to Oakland — back in 2009 during his rookie season — resulted in a four-sack performance and then on Sunday, the 27-year-old added two more for good measure.

“It’s only twice I did it,” Orakpo said. “It’s a coincidence. I’m not going to sit here and say that every time we play Oakland it’s going to be like that. It just happened to fall in my lap like that.”

Considering Orakpo spent most of last season sidelined with an pectoral injury, he was more than due for a dominant outing to show skeptic he should still be viewed as a top-tier pass rusher. Sure, it’s only one game and it came against Matt Flynn on a day when he looked like anything but an NFL quarterback, but if it’s the effort that gets Orakpo going again, then ‘Skins fans will happily take it.

Much like Orakpo, the rest of the Redskins defense apparently love to travel to Oakland as well.

For as bad as Washington’s defense was through three games (allowing a mind-numbing 1,464 yards of offense), they more than made up for it with an absolutely dominant showing against the Raiders.

Sure, you can point out that a talent-deficient Raiders squad was without the services of their preferred starting quarterback (Terrelle Pryor) and running back (Darren McFadden), but this unit was in dire need of anything worth building on and the Raiders were just what the doctor ordered.

Three different Redskins -– nose tackle Barry Cofield, outside linebacker Ryan Kerrigan and Orakpo –- each finished the game with two sacks. The last time the Redskins had three different players register at least two sacks in a single game was against the Atlanta Falcons, Dec. 19, 1993.

For the game, the Redskins’ defense had seven sacks, scored seven points and only allowed Oakland’s offense to score seven points. Washington also held the Raiders to 298 yards and 14 points, both season-best totals for the burgundy and gold.

“I talked to them right after the game,” Shanahan said. “They did a heck of a job, any time you get seven sacks in the National Football League and return an interception for a touchdown. David Amerson did a great job. We couldn’t get a lot going offensively. They kept us in the game, and we managed to make a couple of plays later in the game.”

The Redskins now head into the bye week at 1-3. It’s obviously not an ideal situation — to drop three of four or to have a bye week so early in a 16-game season, but honestly, a week off might do this team some good.

For starters, it gives Griffin another two weeks to get back into game shape. Coming off surgery and without the benefit of a preseason to work out the kinks, RGIII can use these next 14 days to work the rust off and be ready for primetime in Dallas.

Just as importantly, running back Alfred Morris can take the time to heal his bruised ribs — an injury that was serious enough to knock him out of this game after picking up 71 yards on 16 carries.

It was impossible to tell the status of Morris in the post-game locker room. That’s because he was so heavily medicated, I half expected him to fall asleep standing up as he was getting dressed. One or two reporters came up to him to check up on him and the second-year pro could barely keep his eyes open as he tried to pull his shirt over his head.

Morris is a tough and durable back, but a rib injury is no fun for anyone. Routine actions, like sleeping, become infinitely more difficult when it hurts every time you move. If this offense is ever going to get going, it’ll be thanks to Griffin and Morris. If getting them both back to 100 percent means having a bye week a month earlier than you’d like, then so be it.