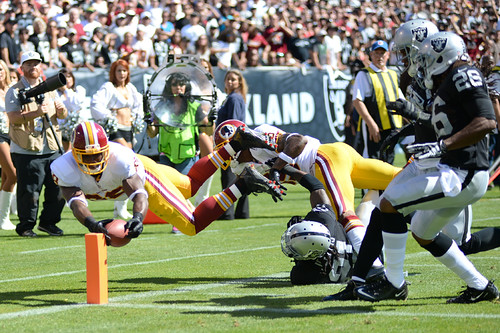 As the first month of the season has quickly proven, wins are tough to come by in the National Football League.

The Washington Redskins might have been a playoff team one season ago, but that means nothing in 2013.

Through three games, the Redskins struggled in all three phases of the game and the natives were officially becoming restless. Enter the Oakland Raiders.

While the silver and black happily kicked off their pre-game festivities by showing highlights from their Super Bowl XVIII victory over the Redskins, that was 30 years ago. With just three trips to the playoffs since ’94, the Raiders are no longer one of the league’s dominant franchises.

After digging themselves an early 14-0 hole, the Redskins finally remembered that and easily dispatched Oakland. It wasn’t always pretty and it took longer to get going than they would have liked, but at the end of the day, Washington earned a hard-fought victory, thanks to huge individual efforts by players such as Barry Cofield, David Amerson and Pierre Garcon.

Sure, it’s only one win and it came against a team forced to play backups at quarterback, running back and fullback, but it counts just the same in the standings. That being said, this one win against a not-very-good Raiders squad doesn’t exactly mean it’s time to start booking flights for the Super Bowl either.

“I think what you do is you go back and you’re tough on yourself, especially when you win when you look at the film,” said head coach Mike Shanahan. “You talk about things you could have done to put the game away much earlier or what it takes to have a great day on both sides of the football. That’s what you’re constantly trying to do is look at the things you did poorly, try to improve on those. You always feel good when you win. That’s the objective. Our football team is pretty realistic. They know what type of effort we have to have to get to the next level, what type of play we have to do consistently to win the division.”

So enjoy the win ‘Skins fans, and please feel free to check out my favorite photos I was able to capture from the sidelines this week. After all, it’s going to be two weeks before the burgundy and gold take to the field again, so you might as well savor this one for a day or two longer.