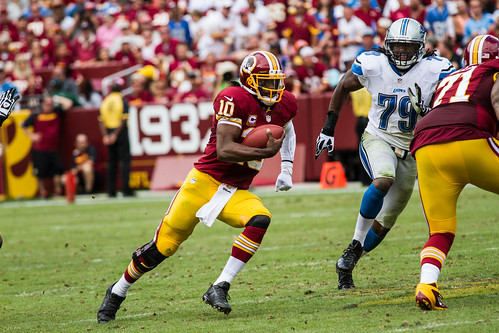 By now, it’s safe to say that fans of the Washington Redskins knew coming into the game, Washington was 21-0 in home games against the Detroit Lions since 1937. But how bad have things gone south for the burgundy and gold in just three weeks? The Philadelphia Eagles, Green Bay Packers and Lions are 3-0 against the Redskins, and 1-5 versus the rest of the NFL.

Coming off of last year’s postseason run (and, to a much lesser extent, an undefeated preseason), folks around town automatically assumed that the Redskins were set for the next decade or so. Unfortunately, that’s not really how things work in the NFL.

For as fondly as people choose to remember the ’12 season, it still took a seven-game winning streak just to sneak into the postseason on the final day of the regular season. And here we are, in year four of the Mike Shanahan era and what does the franchise have to show for it? A boring and predictable offense, a debacle for a defense and a special teams unit that excels at nothing. Other than that, this season has been a smashing success.

Through 50 games* in Washington, Shanahan is just 21-29. Yes, the roster is younger and now features something that finally resembles depth, and yes, the league did take away $18 million in salary cap space this past offseason, but how did this franchise become so unwatchable so quickly?

*As Dan Steinberg pointed out, this was actually Shanahan’s 51st regular season game in Washington, so let’s make that 21-30. Fun times.

2. “Bottom Of A Bottle” by Smile Empty Soul

While the statsheet shows the Redskins lost to the Lions by a score of 27-20, those who watched the game will agree that it didn’t even really feel that close.

Redskins quarterback Robert Griffin III and the offense once again failed to show up for the first quarter, and once again the only person capable of putting up points in the opening quarter was cornerback DeAngelo Hall.

Washington’s two first-quarter drives ended with Sav Rocca punting the ball away and their first possession of the second quarter ended with an interception after an ill-advised pass attempt by Griffin.

Later in the game, the franchise quarterback opted to dive head-first rather than slide after a quarterback keeper and lost the ball on a fumble caused by the turf. And throughout the game, the offense lack discipline and/or a sense of purpose.

Last season, Griffin was praised for his ability to avoid turnovers. This season, he can’t do anything right in the turnover department. With four fumbles and four interceptions in just three games, Griffin isn’t playing like Griffin these days.

“It’s the rule. It can be a sucky rule, but it’s still one of the NFL rules, and they said it’s a fumble,” he said. “So, it’s unfortunate, and I’ve just got to make sure if I dive forward, hold onto the ball … It was really unfortunate that we lost the game on two calls, two judgment calls.”

I’m not saying it’s all on RGIII, but this was the same ugly, uninspired football that Redskins fans were subjected to by the likes of Donovan McNabb, Rex Grossman and John Beck. To see the offense play this poorly and to be this ineffective with the Heisman Trophy winner standing behind center is obviously cause for concern in our nation’s capital.

3. “We Are” by Hollywood Undead

Through the first two weeks of the ’13 season, no receiver scored a touchdown against the Lions. Thanks to Aldrick Robinson, that record was extended another week.

For a brief moment, the Redskins looked like last year’s model –as RGIII connected with Robinson for a 57-yard touchdown that gave the team the lead with just over nine minutes remaining. But replay showed that Robinson was unable to secure the ball and the game officials correctly reversed the call — taking away the team’s first truly memorable offensive play on the entire season.

The quick strike offense that Griffin and company ran so wonderfully a season ago is nowhere to be seen. Instead, the Redskins must attempt to dink and dunk their way down the field, which is tough when the vast majority of your receivers are pedestrian and your offense as a whole is incapable of avoiding stupid penalties.

Basically, Alfred Morris and Pierre Garcon are the only two dependable weapons RGIII has at the moment. Everyone else — especially Robinson — falls under the “more harm than good” category. The only reason Robinson is on this roster is because of his blazing speed and ability to catch the deep ball.

If he can no longer be counted on to do the one thing he’s around for, then why keep him on the payroll?

4. “Before I Forget” by Slipknot

The defense is terrible. The secondary is even worse. Safety Brandon Meriweather, in particular, is someone I’d officially be okay with never playing another game for the Redskins. Sure, he seems to be a talented player, who from time to time is capable of creating turnovers. But he’s also someone who plays completely reckless and is in all likelihood going to one day seriously injure someone — whether it’s himself, a teammate or a defenseless receiver.

Last week, Meriweather delivered a helmet-to-helmet hit on Packers running back Eddie Lacy that knocked the rookie out of the game with a concussion. And then he followed it up by knocking himself out of the game a quarter later when he lowered his head and knocked himself stupid.

This week, Meriweather tried to deliver a killshot to a Detroit ball carrier and missed — and ended up drilling outside linebacker Brian Orakpo.

Back in his day, Sean Taylor played with a mean streak that caused opposing players to think twice before going across the middle. He was an intense player who wanted to send a message to the opposition with his play, but it wasn’t like this.

Meriweather is a mediocre safety who seems to only care about running around trying to blow people up. He seems to favor helmet-to-helmet hits because when he doesn’t, he looks foolish as he bounces off of running backs.

Ultimately, Meriweather is the perfect representation of Jim Haslett’s defense. You keep waiting and waiting to see something special, but at the end of the day, there’s nothing to write home about.

Let’s put it this way — if you’re a mediocre backup running back, you really, really want to see the Redskins on your schedule in 2013. Week 1 LeSean McCoy had the best game of his professional career with 184 rushing yards and a touchdown. That’s not something most teams want to see happen at their expense, but he’s at least known as one of the best backs in the NFL.

Last week, someone named James Starks, who apparently has been in the league for four seasons, had the best game of his pro career with 132 yards and a touchdown.

This week, an unheralded running back named Joique Bell started in place of the injured Reggie Bush and racked up 132 total yards and a touchdown.

Washington’s defense ranks 30th against the pass and 31st against the run, and when it comes to the ground game, they’re mostly getting lit up by guys who aren’t actually any good.