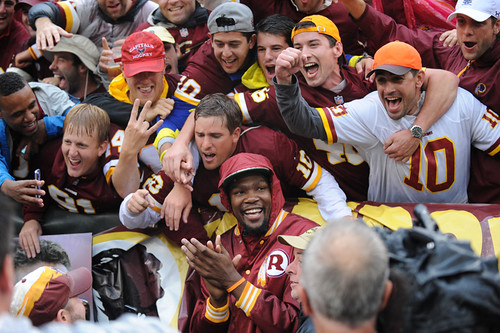 The Washington Redskins have not gotten off to a very enjoyable start in 2013.

The offense, especially in the first half, has been missing in action. The defense, pretty much every time they take the field, has looked completely overwhelmed and under-prepared for seemingly whoever lines up against them.

Oh, and the special teams has done nothing worth highlighting — unless you’re a fan of missed field goals, shanked punts, poor returns and penalties. So yeah … even the most optimistic homer is struggling these days to keep things positive.

And yet, a group of 26 rowdy and enthusiastic Redskins fans made the trip from D.C. to sit as close to the action as possible as the burgundy and gold traveled to historic Lambeau Field.

They had signs featuring the likeness of prominent Redskins personnel — like Sean Taylor, Daniel Snyder and London Fletcher. Even during warm-ups, these dedicated gentlemen cheered with such passion that players such as Fred Davis had to swing by and recognize their efforts.

And by the way, they were so rowdy and entertaining that even hoops royalty Kevin Durant had to get in on the action. Durant, who is a ‘Skins diehard in his own right, was watching the team run drills pregame while these guys were doing their thing — chanting “Free Tenard! Free Tenard!” and a half dozen other similarly witty comments. By the time they started chanting for Durant, he was already walking over to them.

Next thing you know, everyone joins together for a spirited rendition of “Hail to the Redskins,” Durant included. And then the game started and all of the fun times quickly went away.

At any rate, here are my favorite photos I was able to capture from the sidelines this week. Don’t click them for me. Do it for Durant and the diehard D.C. fans who showed up and cheered their respective asses off.

Even after the loss, those guys were still trying to keep things positive. Take a look:

I Love my skins!! Win or lose. Being at Lambeau for the game was one of the best experiences ever! Green Bay is a legendary town! #respect